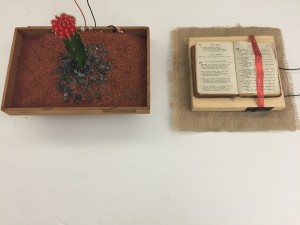 A series of sound sculptures with each having a sound and tactile manifestation of a stanza from a poem called Loteria (referring to the Mexican bingo game).

Let whoever reads this understand
that when the desert took me,
it left me with only a lighter
and a friend.

Experience: As participant touches the needles around the cactus, the sound plays the stanza 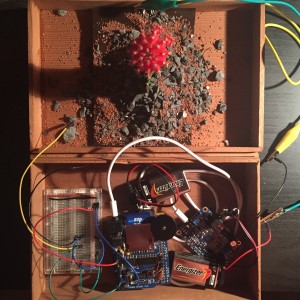 The guitar was called Mojave.
It had 10 strings with 4 broken.
The perfect sound to reverberate against
an audience of sand.

Experience: As the participant gets very close to the book, he or she can listen to the stanza 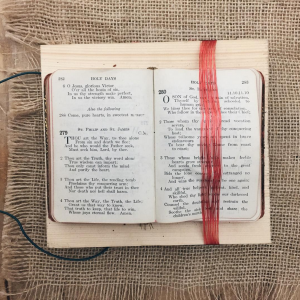 I found one of the Milky Way’s spiral arms
embracing a small ranch in Tapalpa.
In the darkness I heard two scorpions dancing, singing,
We have not been before, and we will not be again.

Experience: As two or more people touch the edges of this very long knitted copper wire, the speaker plays the stanza

I watched a man choke on a pear,
and hoped for 6 or 7 minutes
that someone else would help him.

Experience: As sand goes through, the speaker is playing the stanza that is coming from the pot, the more it gets filled the harder it is to hear it

The project is a sound installation consisting of five hand-made speakers. Each speaker will be set to play a stanza from a poem (Loteria by Adrian Coto), with each stanza focusing on an aspect of human experience and emotion. The audience will be encouraged to figure out how to close the circuit to hear each stanza.

Stanza:
La Pera
I watched a man choke on a pear,
and hoped for 6 or 7 minutes
that someone else would help him.

Description:
La Pera deals with my sense/flaw of inaction and indecision. While the scene it portrays is a hyperbolized, actual event, it highlights my fear of squandering potential or not helping others due to not being decisive and confident.

Stanza:
El Músico
The guitar was called Mojave.
It had 10 strings with 4 broken.
The perfect sound to reverberate against
an audience of sand.

Description:
El Musico focuses on the use of injury or setback to channel creativity. I sustained a hand injury, which left me unable to play guitar, but as a result found alternative and new ways to express myself. Such setback reminds me of the need to express myself for myself, without any regard for who might or might not be listening.

Stanza:
La Muerte
Ya me cansé.
Espero que Dios me lleva bien pronto,
said my grandmother after a discussion
weighing the benefits of weed over painkillers.

Description:
La Muerte highlights a strange view of death that I developed as a teenager and early adulthood. This view consisted of an unsure, uncertain idea of death, but that what was certain was that death would be rest from the hardship of life. It also speaks to the almost universal aspect of people finding respite from life in various diversions, drugs, or escapes (in this case, my use of drugs vs. my grandmother’s use of drugs).

Stanza:
El Nopal
Let whoever reads this understand
that when the desert took me,
it left me with only a lighter
and a friend.

Stanza:
El Alacrán
I found one of the Milky Way’s spiral arms
embracing a small ranch in Tapalpa.
In the darkness I heard two scorpions dancing, singing,
We have not been before, and we will not be again.

Description:
El Alacran brings about a more refined and comforting, yet fatalistic view on death. It shows that life is and always will be finite, and that our connection to the cosmos, whether we are consciously living or not, will be infinite.

My final project will be a sound piece consisting of several soft circuit speakers. Each speaker will play a stanza of a poem called Loteria. Loteria  is a Mexican game of chance, similar to bingo, but using images on a deck of cards instead of plain number on ping pong balls. In the poem, each stanza is dedicated to one image from the Loteria. For the project, I will be building one speaker for each stanza. The materials that I will choose for each speaker will go accordingly to the image and what is saying in the stanza. I am not sure yet if the speakers will all be hanging similar to a clothesline where the person would walk alongside to hear the sound or if each speaker will be a separate unit that the person will be able to pick up or get close to it. 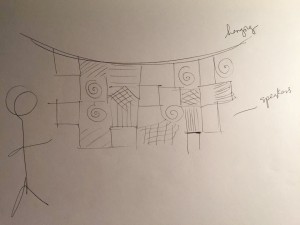 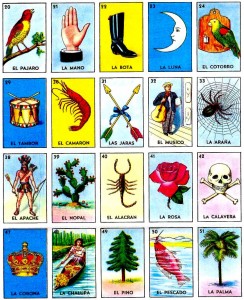 I watched a man choke on a pear,
and hoped for 6 or 7 minutes
that someone else would help him.

The guitar was called Mojave.
It had 10 strings with 4 broken.
The perfect sound to reverberate against
an audience of sand.

As a sickly child chillin in a hospital bed, I realized that Seben-Ahp y caldo we’re no longer suitable stalling tactics.

In this future, people are loosing their ability to remember and connect with their own feelings, therefore it is harder for them to find meaning in their life. In order to help the situation, this audio recorder is a daily reminder for what one’s grateful for.

The recorder and speaker are embedded in one’s pillow. Before going to sleep one records what they are grateful for. Right when one is waking up, the speaker starts playing subtlety the recording from the night before. By hearing what one is grateful for at the same time that one is waking up, it allows connection with one’s feelings at the beginning of the day. 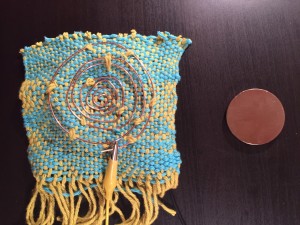 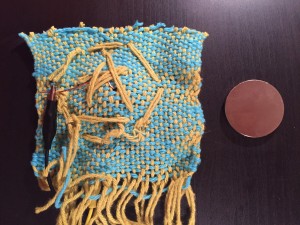 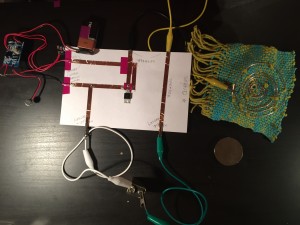 It is very hard to hear the recording in this video. The speaker was ok for when the ear is directly on top of it but not if you are a little bit farther away. The magnet is very powerful but the fabric is very thick for it to vibrate.

A book lamp that turns on when one sits down and puts their forearms in the armchairs. 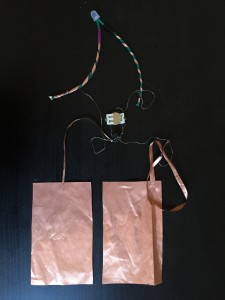 ATtiny + human circuit code (for some reason it was working just touching one wire and once I built the soft circuit for it, I had to touch the two wires in order to get it to work). This is the one I ended up using for the book lamp.

I did a rough prototype of an experience to encourage the user to dig/look and discover what there is underneath the sand. The combination of touching the sand while also getting light feedback might encourage the use to keep on doing it while maybe relaxing them. 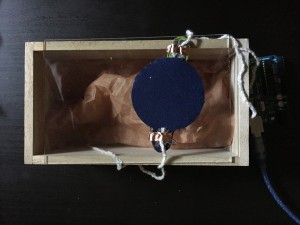 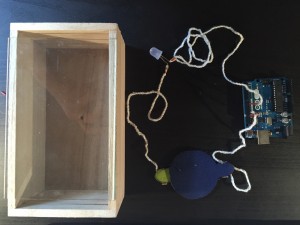 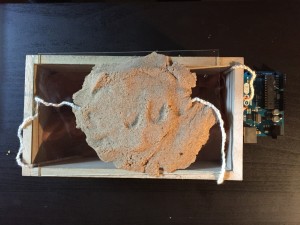 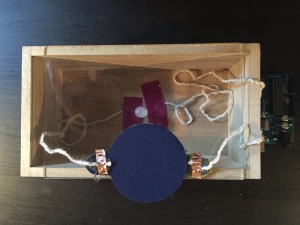 I always find it hard when someone asks me to classify myself in a career field. I constantly see myself in several and often all these overlap each other. So I try to not pay too much attention on what category I am or to judge my work but always keep doing and let the viewer classify the work I do however they want to. I believe classifying the work is easier and more specific, instead of classifying the person. The person is so complex that whatever he or she is, there is always more to it. At this moment I would say that I identify myself as an artist. An artist who is a designer, maker, storyteller, researcher, who is learning how to code and to become an educator. I choose an artist as my main category due that to my past experience classifying myself like this has given me the more freedom to express myself and to let my work be whatever it wants to be.

My favorite tool at the moment is my burgundy mechanical pencil. I enjoy so much how precise and graceful it is. It gives me the sense that all my thoughts can come out easier through this pencil. Also, its strong point helps me open, bend and manipulate different materials whenever I don’t have any other tools!

Sometimes I am very impatient and whenever this is the case, learning a craft becomes very stressful. It doesn’t matter if I’m by myself or with other people. Somehow I get the idea that I “should” be able to learn a craft very easily and therefore when I’m not I do not enjoy the process. The times that I have been able to slow myself down and notice the details of the craft and my hands working with it, are the times that I’m not even paying attention about the final look of the product but at the process of it and it is when I enjoy my time and I learn so much more than I expected about the craft and about my abilities. I think teaching a craft to someone else takes time, patient, the ability to listen and understand the other person. It is very much like having a clear open communication with another person and it is not always easy. In order to teach a craft one does not have to assume anything about the person but come at it with an intent to pass information and enjoy the time together. 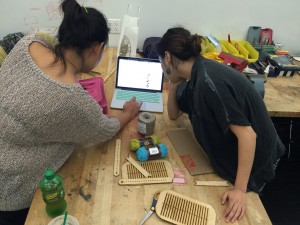 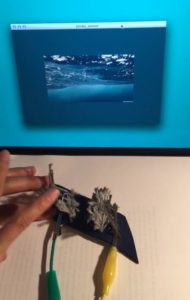 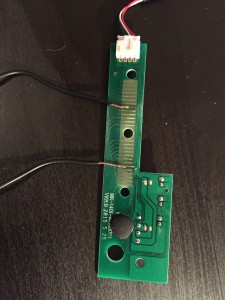 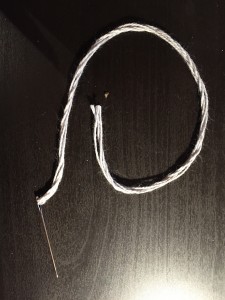 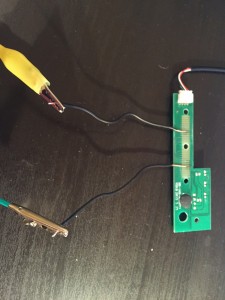 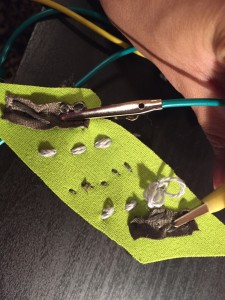 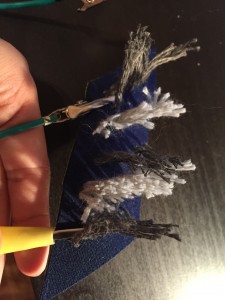 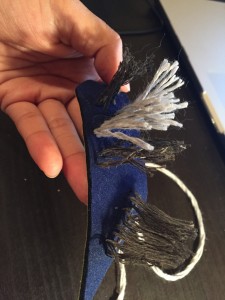 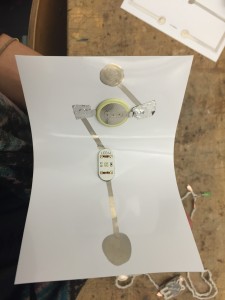 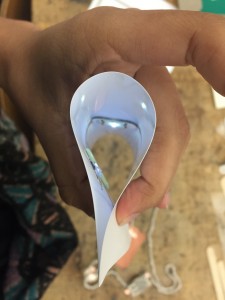 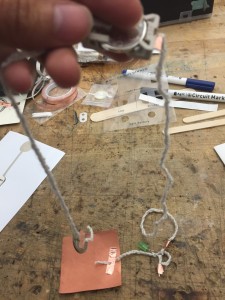 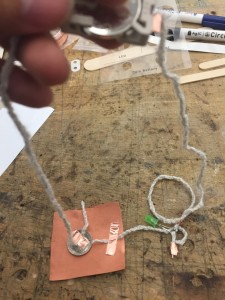