When people touches the terrarium, the Leds start to blink mimicking living creatures breathing; a blue leaf slowly appears in the sand.

My target audiences are people who would like to appreciate unnoticeable beauty. I invite my audiences to observe all the common electronic components closely and enjoy the authentic and magical feeling of technology.

In this final version, I used Attiny instead of Arduino to save space. I also used a lot of colorful wires to create a messy, organic feeling.

To give a better control over the batteries, I used a battery holder of the coin battery and a detachable wire for the 9V battery. 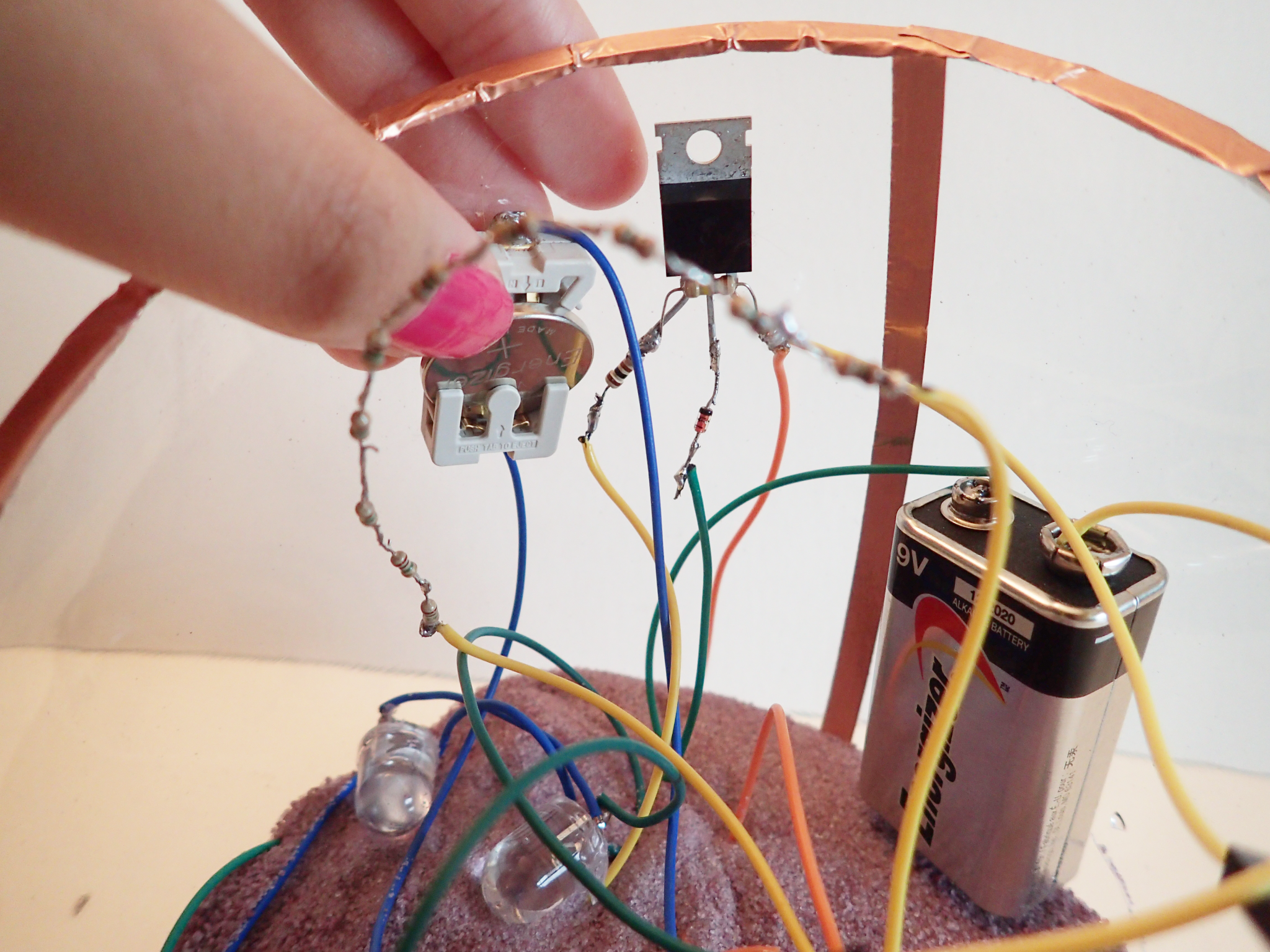 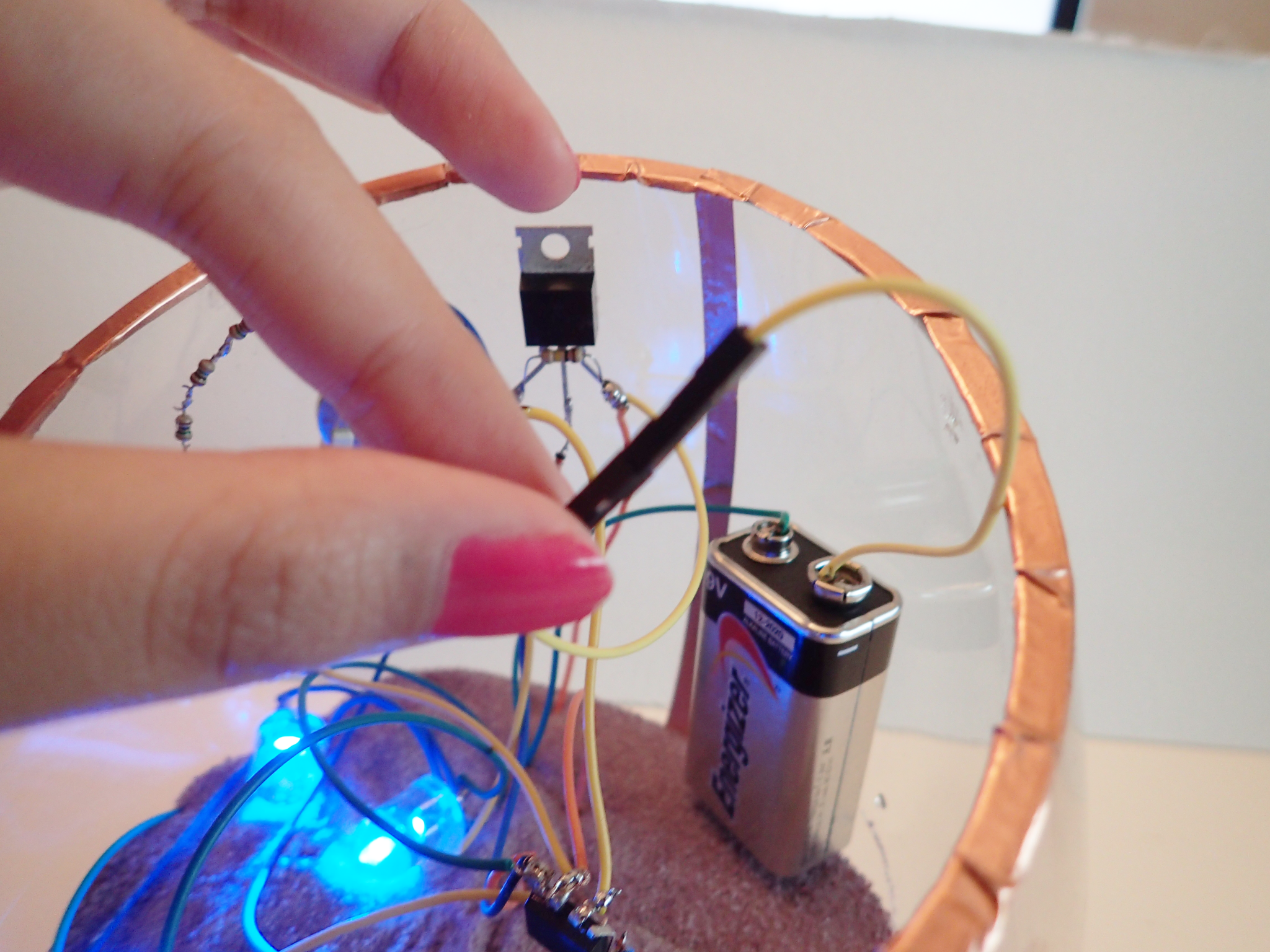 For further iterations, I would like to explore the possibility of a  larger scale and adding projection to it as Sheena form Parsons Paris suggested. I made another project called Grow that explores the connection between physical and digital world that related to Sheena’s comment. In this iteration I only used physical components because comparing to virtual images, people consider the physical components less authentic.

After fill in the sand, I found the touch sensing became less sensitive as before. I believe the resistance of the sand affected the sensing. But I already soldered the Attiny in the circuit so I can’t change the code to sense higher input.

I’m creating an interactive electronic terrarium. Normally, people put plants or plastic plants in terrariums to create a small concentrated nature environment.  I think the interesting point of a terrarium is the glass vase isolates the ordinary objects from the real world and frames the objects for people to take a close look. My idea is to include electronic components into a terrarium for people to appreciate the aesthetic aspects of technology. Also, I also want to express technology is alive in another way.

I’ve been working on creating a base of color changing sand. Everything worked outside the terrarium. But the terrarium I got is too small — the Arduino and the battery already took most of the space. I’m going to get a bigger one this week.

I mixed red thermochromic dye with blue paint to create this purple sand that turns blue when heated. 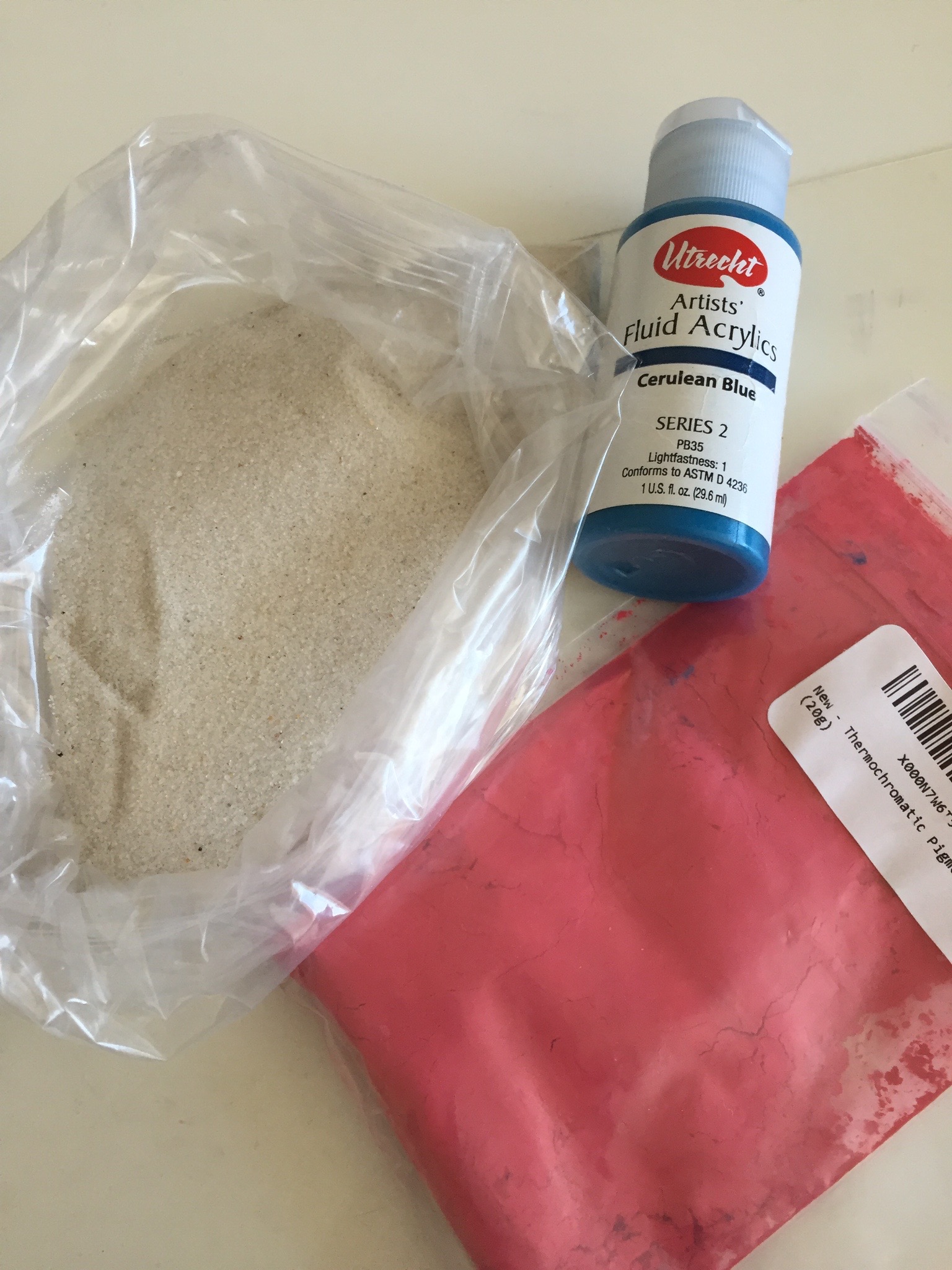 2. Sew the Flexinol into a pattern

I chose a simple shape of leaf for a clear result. Also, the leaf brings a sense of nature into the project.

I soldered several 1M ohm resistors together for capacity sensing. People looking close to the terrarium triggers the effects. I chose peek into the terrarium as the interaction is because it’s a natural respond most people will have without any instructions. 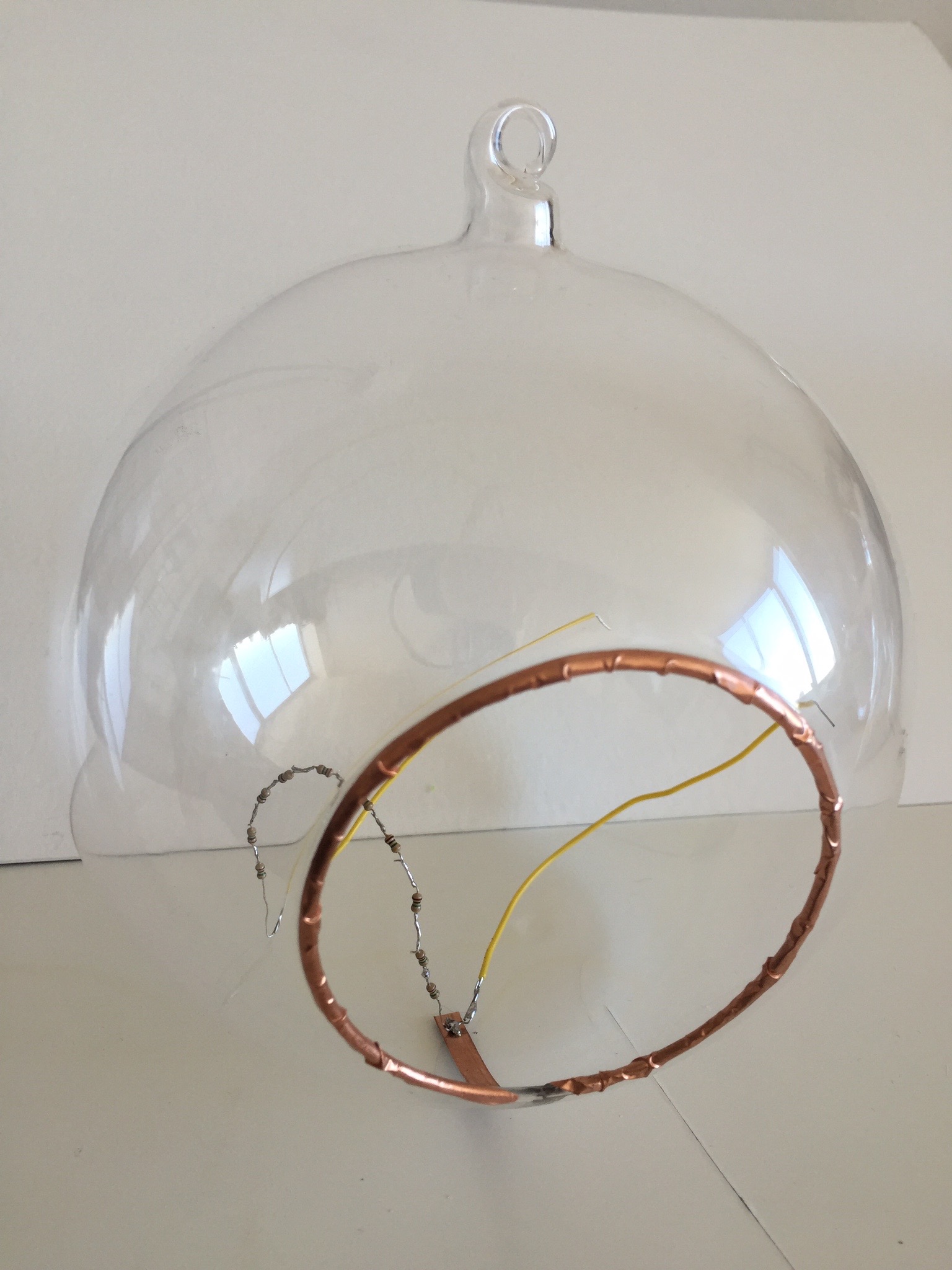 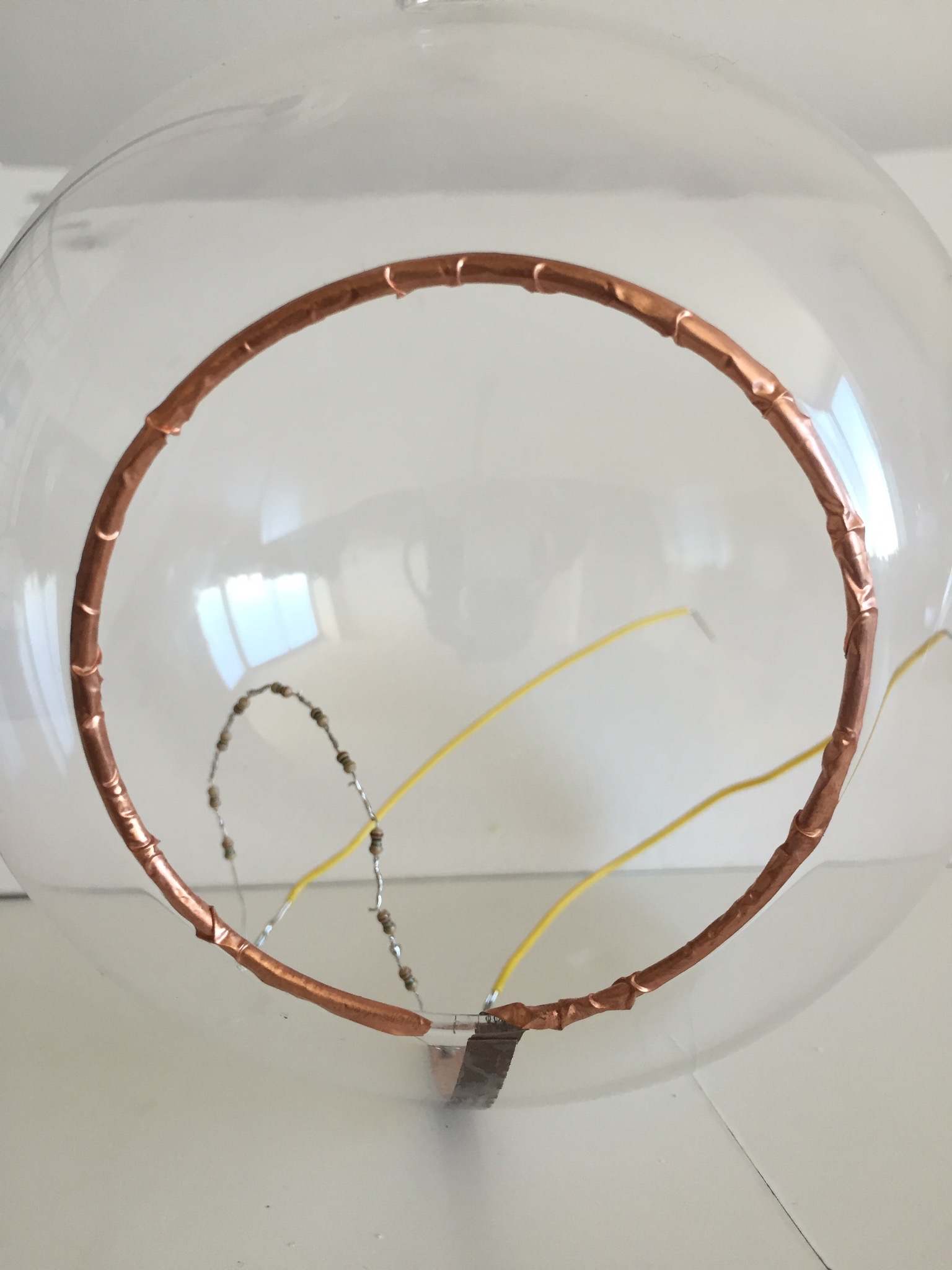 For my final project, I want to create an interactive terrarium sculpture.

Instead of living plants, the terrarium will be filled with electronic components (such as Arduino,resistors,LEDs,wires and motors) combined with fabric, paper and some organic materials.

Different components will have different behaviors when human come close and touch them. Some will become active some will hide away. It will simulates living creatures reacting to human presence. 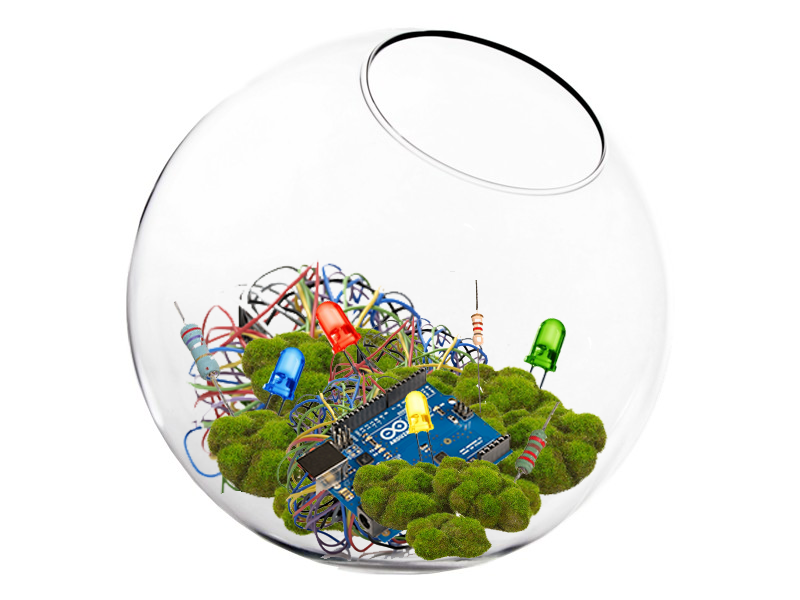 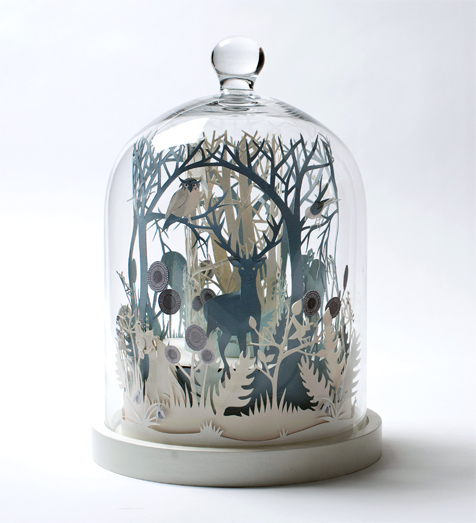 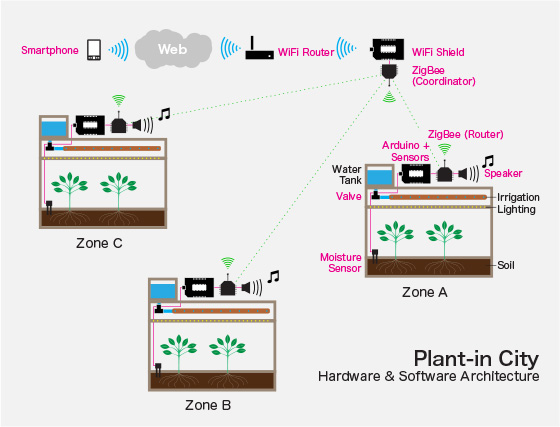 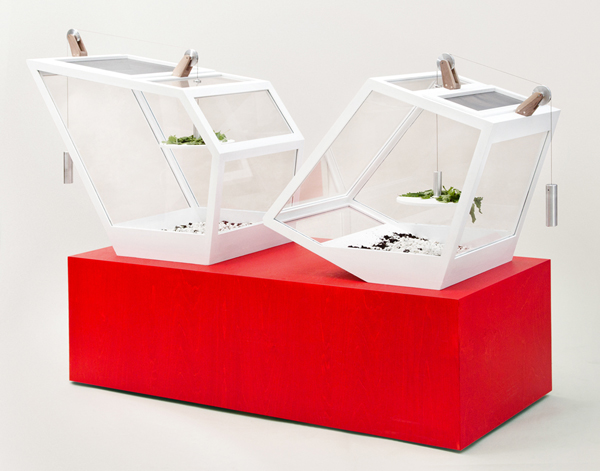 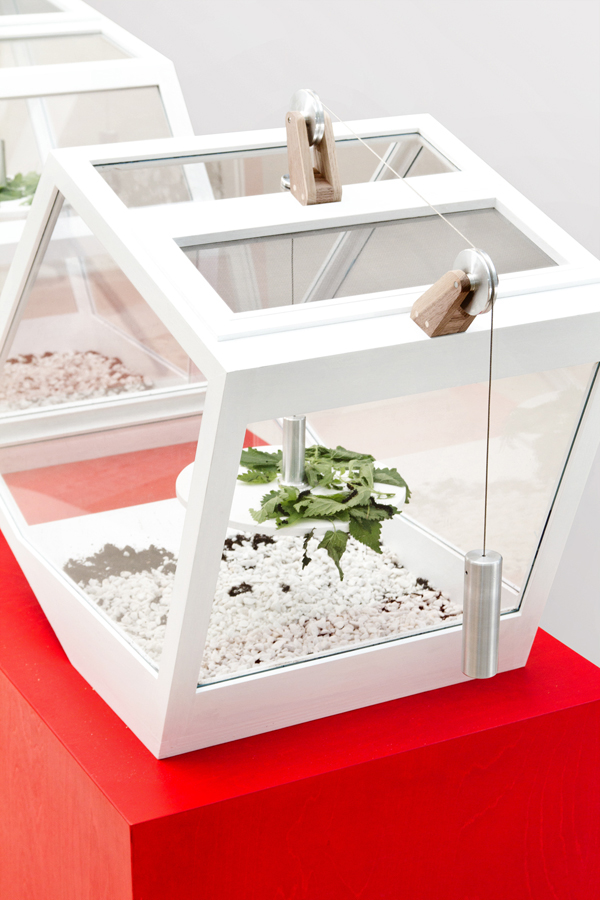 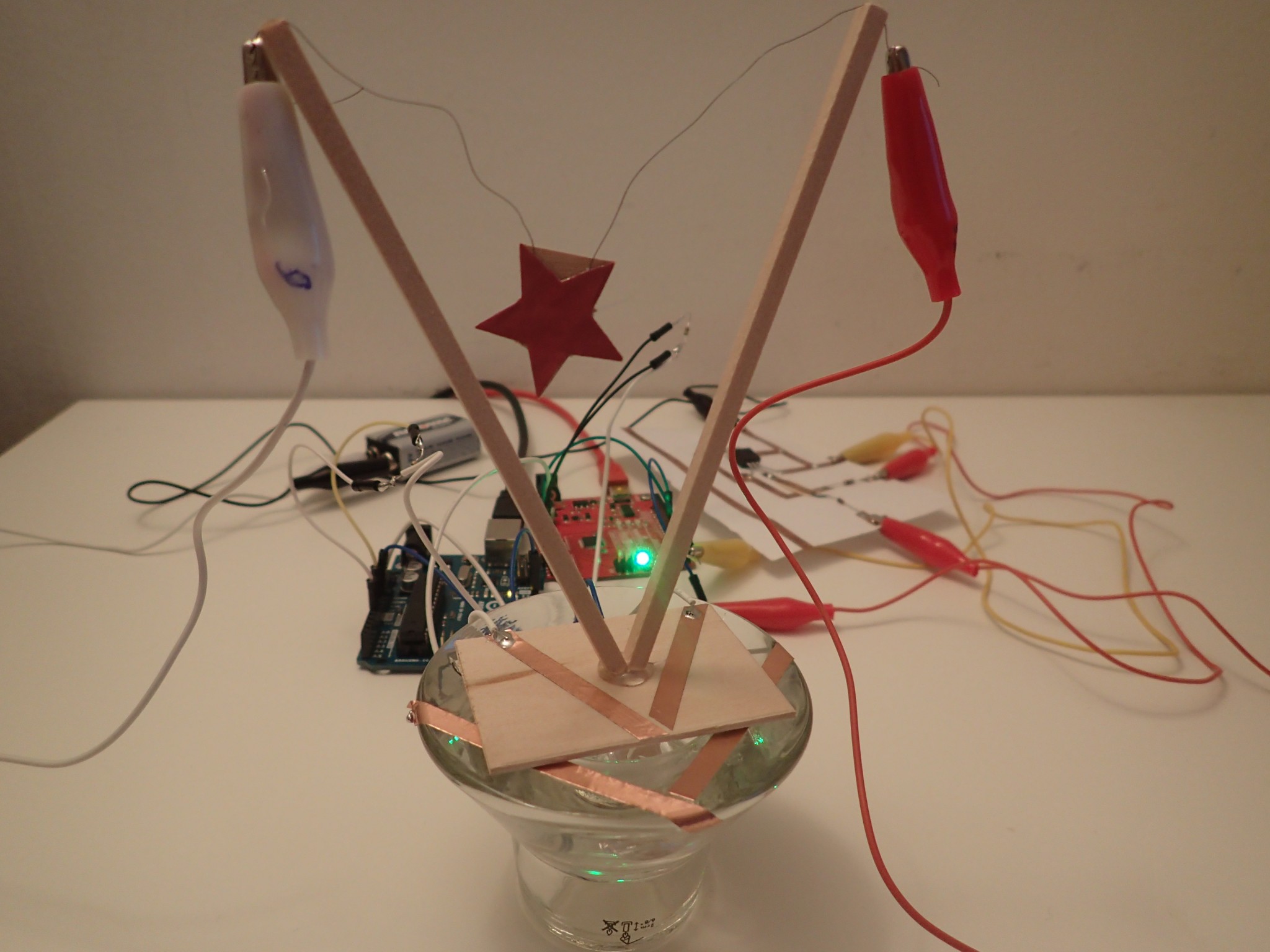 Memory Star is a memory storing tool for people in the future who have trouble sleeping.

Before bed, user simply touch the base and his or her memory will be stored in the star leaving the user a clear mind. User can fall a sleep like a baby without any heavy thoughts.

To reload the memory, user need to touch the wooden panel until the star turns white — allowing the memory to flow back.

It is a glasses lamp. When the sensor touches the wearer’s face the LED turns on.

I applied the basic capacitive sensor circuit on a sunglasses by connecting the sensor pin to the top of the glasses where touches the wearer’s eye bone.

When someone gets close to him, he gets shy and blushes.

I used a photo resistor to sense people approaching. 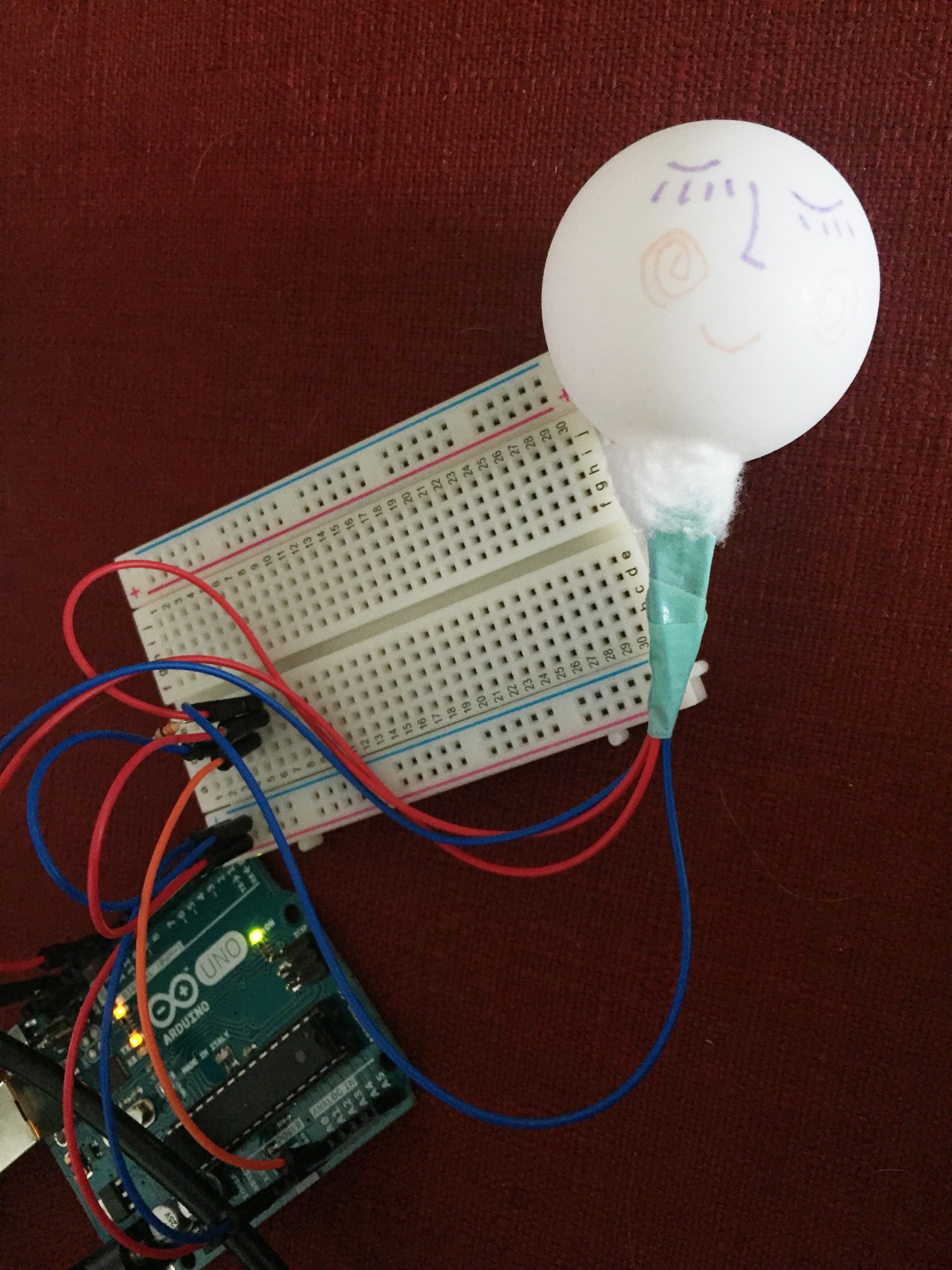 I’m a designer and engineer. I have an engineering degree in industrial design. I’m also a storyteller. I tell a story in every project. I think the story telling methods are very important in design projects. And I’m always finding new possibilities to tell stories.

My favorite tool is paper. The fastest way to organize my thoughts and ideas is writing them down. I also love doing simple sketches and folding paper, not only for the design process but also for fun.

I really love the way that several people get together and learn something new. It’s a lot of fun to figure things out together. I may never be willing to learn weaving by myself. But in my group I enjoyed the learning process. The demonstrations and hands-on activities in class are really helpful to give a quick taste of each craft. By trying a little bit of everything, I quickly found out I don’t quite like knitting and love needle felting. Showing others what I have learned was very satisfying. The only frustration is that after a few days I started to forget the skill. I believe it takes more repeats to get really familiar with it. Next time I would probably finish a small piece beforehand and show the final result before the hands-on activity.

I made this rose out of some coffee filters and a chopstick. I added two red LEDs to give it red color. 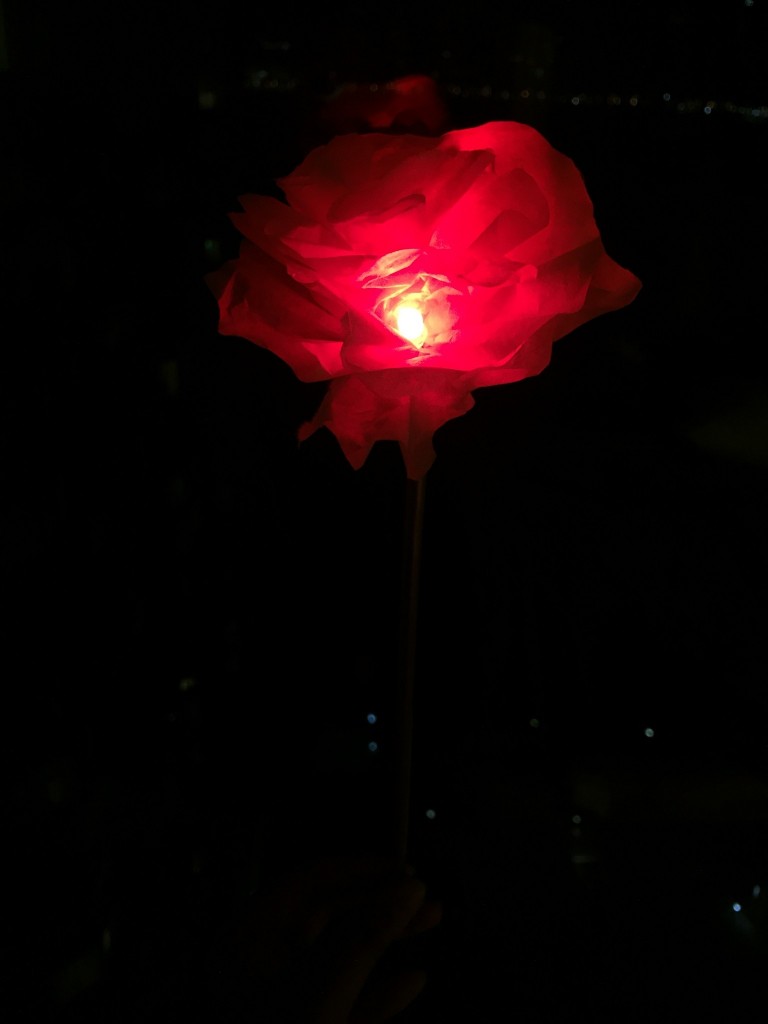 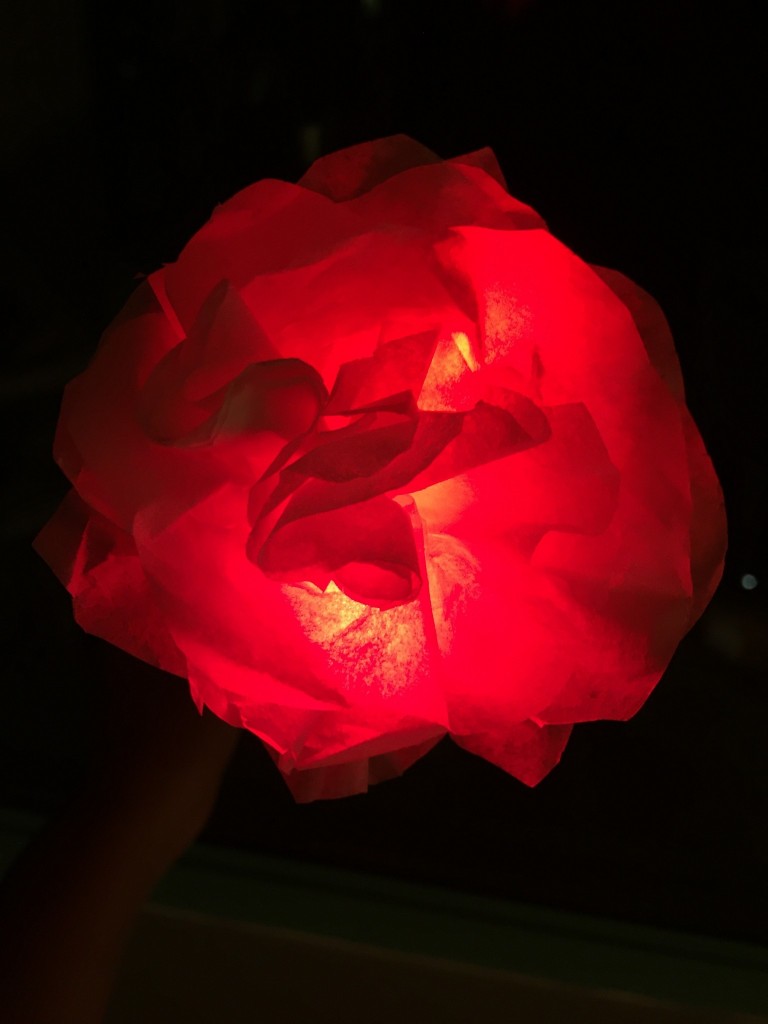 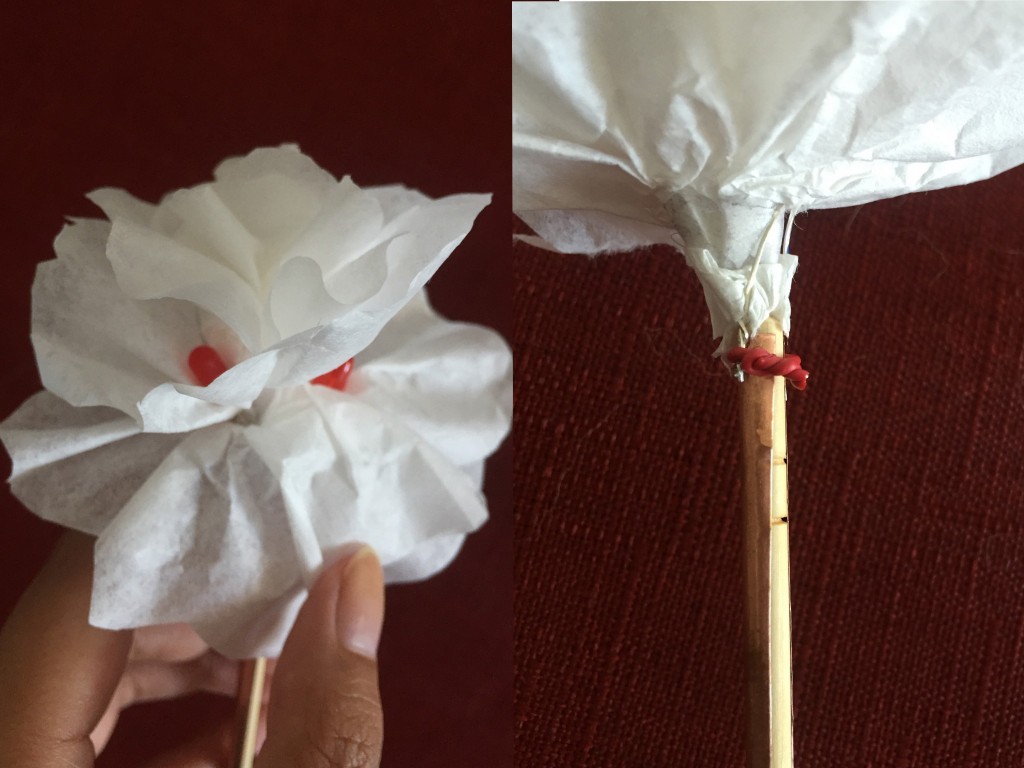 A small cloud in my hand. 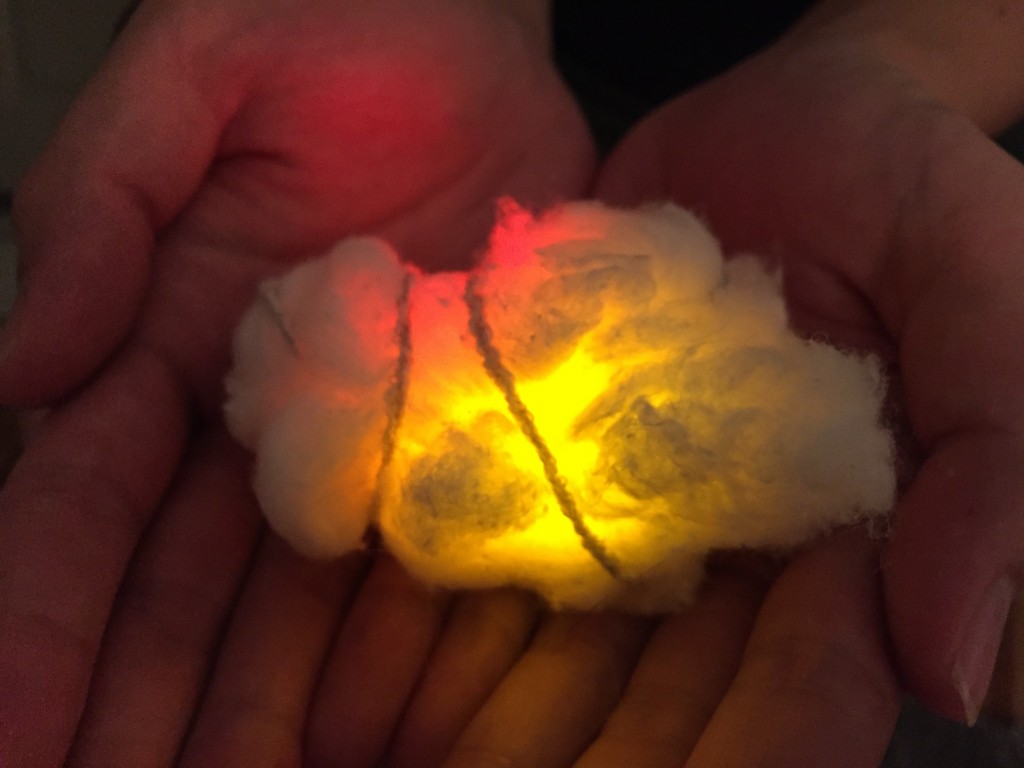 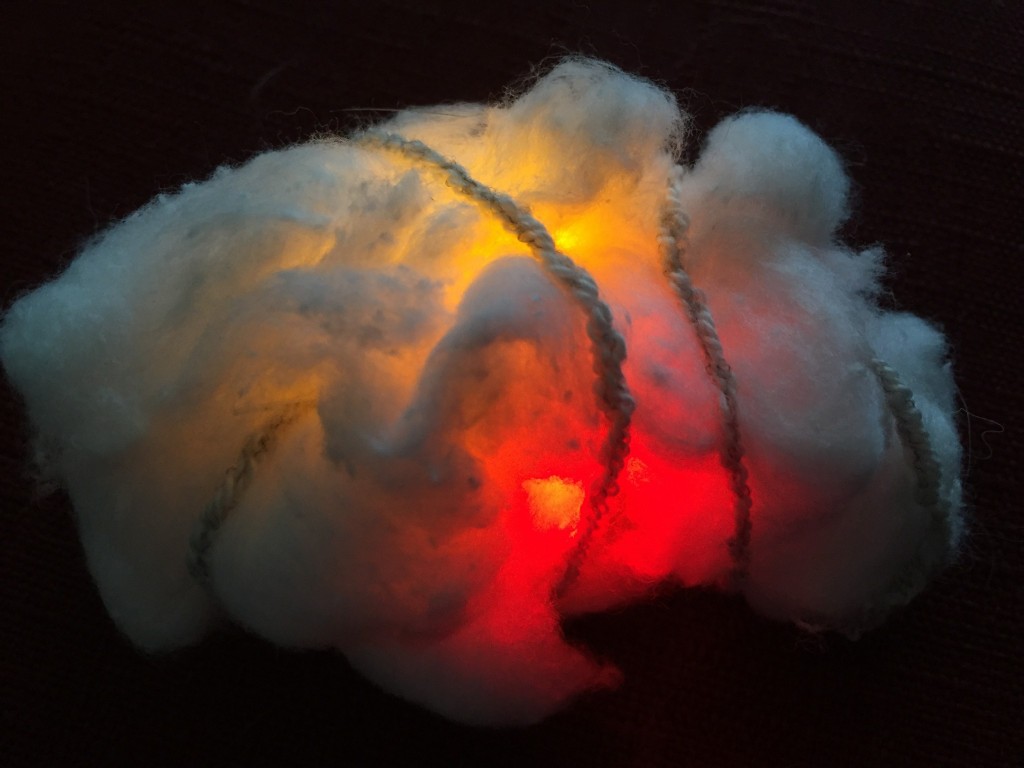 When suddenly to his great surprise, the golden fish spoke to him:” Good fisherman, please spare my life. I am so very small that I would hardly make a mouthful for you and your wife. Please give me my freedom, and throw me back into the sea. If you will, I will five you anything in the world that you wish.”

“Why, you poor little fish,” laughed the fisherman. “You are indeed very generous, and I am only too glad to grant you your freedom.”

So the kind fisherman put the little fish back into the water, and the fish, sparkling like the sunbeams, swam swiftly through the blue water. 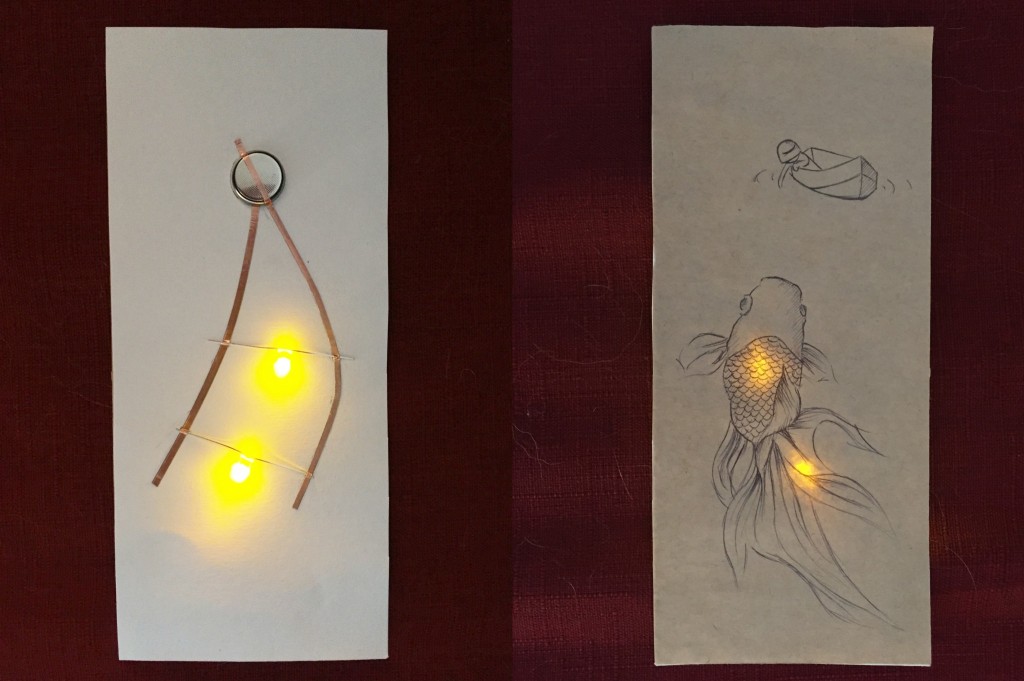 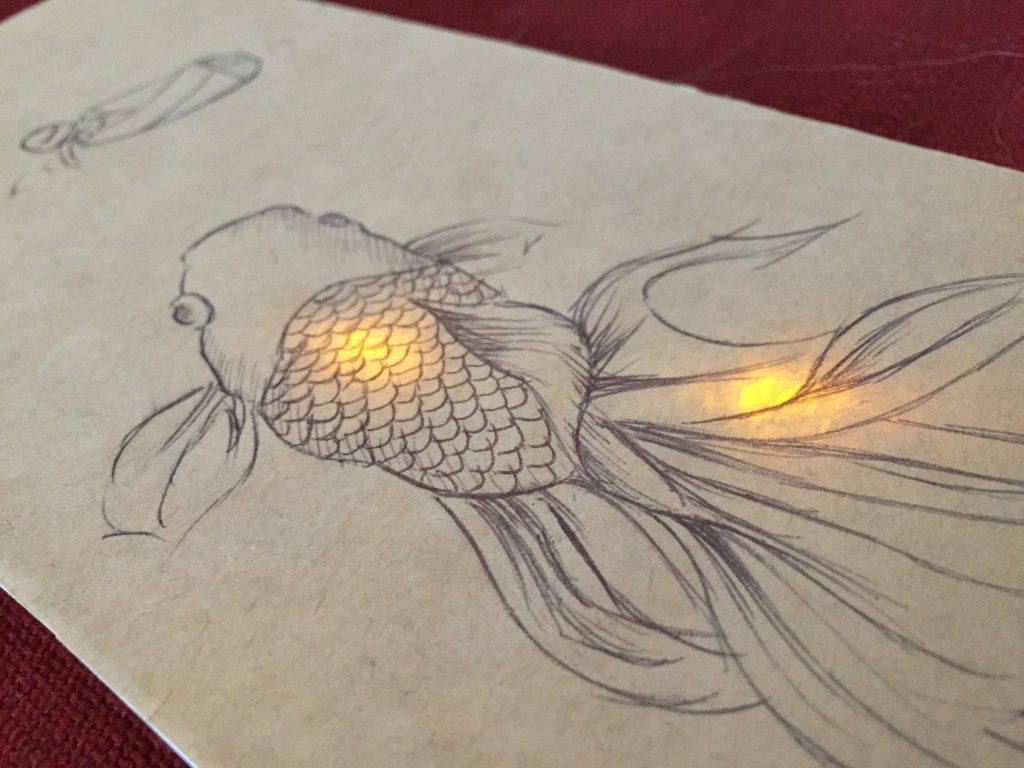 “INTIMACY is a high-tech fashion project exploring the relation between intimacy and technology. Its high-tech garments entitled ‘Intimacy White’ and ‘Intimacy Black’ are made out of opaque smart e-foils that become increasingly transparent based on close and personal encounters with people.

Parts of the dress turn transparent when the wearer’s heart rate rises. It can render visible the wearer’s innermost thoughts. I find this project interesting because it explores several field – fashion, technology, social interactions, and human body.  We tend to hide our excitement, tension and anger from others. We feel vulnerable when people knows our thought just like we are naked. The dress became a part of the wearer and contribute the most honest interaction with others.
Materials: Smart foils, wireless technologies, electronics, LEDs, copper.