Memory itself has become the determining factor of our existential satisfaction, yet at the same time the conditions of late modernity have dislodged ourselves from our physical and social environments.

In many ways this was a bargain struck for the purposes of material comfort and accumulation resulting from industrialization, and a reordering of society based upon production and consumption. This bargain was not without cost to individuals as this process of reordering required a set of separations – a disembedding. A separation of individuals from localized cultures but also within individuals of their physicality from time and space.

Technology is a disembedding condition, that acts to separate our bodies from time and space. The fact that one might project their image across the world, but also record it for another time. In its simplest sense the action being divorced from the body. We might also find that societies themselves suffer from a disembedding as social interactions become mediatized, virtualized and remote.

As we glue these pieces together the configurations seem uneasy as if there must be another way. A recreation of the traditional would be a mere simulation of what was, ill-fitting to our current material circumstances. Conversely a dive headlong into the myth of progre offered by modernity comes up short against the hollow offerings of consumerism and capitalism. And so we are left holding the pieces of ourselves, and the glue of our material capacities yet unable to create satisfying configurations.

While an inescapable condition in which we must construct a reality for ourselves, this cannot happen independently of the material world. To live in a reality of our own choosing in this way would produce a cognitive dissonance unbearable for most, or requiring of ever greater mental gymnastics to achieve internal consistency. By the other extreme, self identity cannot be a purely empirical proposition, as empiricism demonstrates what is predictively rather than that which could be. Self identity is imagination made quasi-real.

Mystical constructions of reality appeal to that with which modernity has failed to supply us. Mysticism is not a failure of knowledge, or an attempt to somehow know the unknowable but a deep desire to approach the material world as a sentient entity, that which could understand us. The horror of nature is its indifference towards us, and we project our sentience upon to remake it such that it should care for us.

While an understanding of an indifferent nature might not always seem horrific, it has always been unacceptable to regard it as such, for to do so would be to regard our own existence if it were to be meaningful as necessarily divorced from it.

An imagined future for an approach to memory would link the technological capacities for storage and of information with the human needs to structure this information within a self narrative and apply a symbolic meaning towards it. In traditional contexts this process has taken many forms, though broadly termed divination. A process by which a natural phenomena is “read” to approach the knowledge of past or future events.

The technological aspect of such a process could be used to guide an arrangements of objects by assigning them the capacity to store information and use it to augment self narrative.

I’m very happy with the outcome of my object and excited about moving forward with some of these techniques, having learned what I have from this process.

There was an initial setback after covering the area in copper paint with the foolish idea that I would be able to gouge out channels in the grooves to establish the circuit. After deciding this would be impossible I opted instead to sand off the top using the copper in the grooves as the active component.

From there forward, things seemed to work quite well and I had an interesting time trying to craft a piece of generate code to match the style and type of interaction with the object.

The instructable can be found here https://github.com/mjglen/CreativeCoding_oF_F15_Michae_Glen/tree/master/3dparticlemesh_project3

The mandala like source code I wrote can be found on my github here http://www.instructables.com/id/Mystical-Geometric-Slab

A little demo video here (in case you missed the presentation) 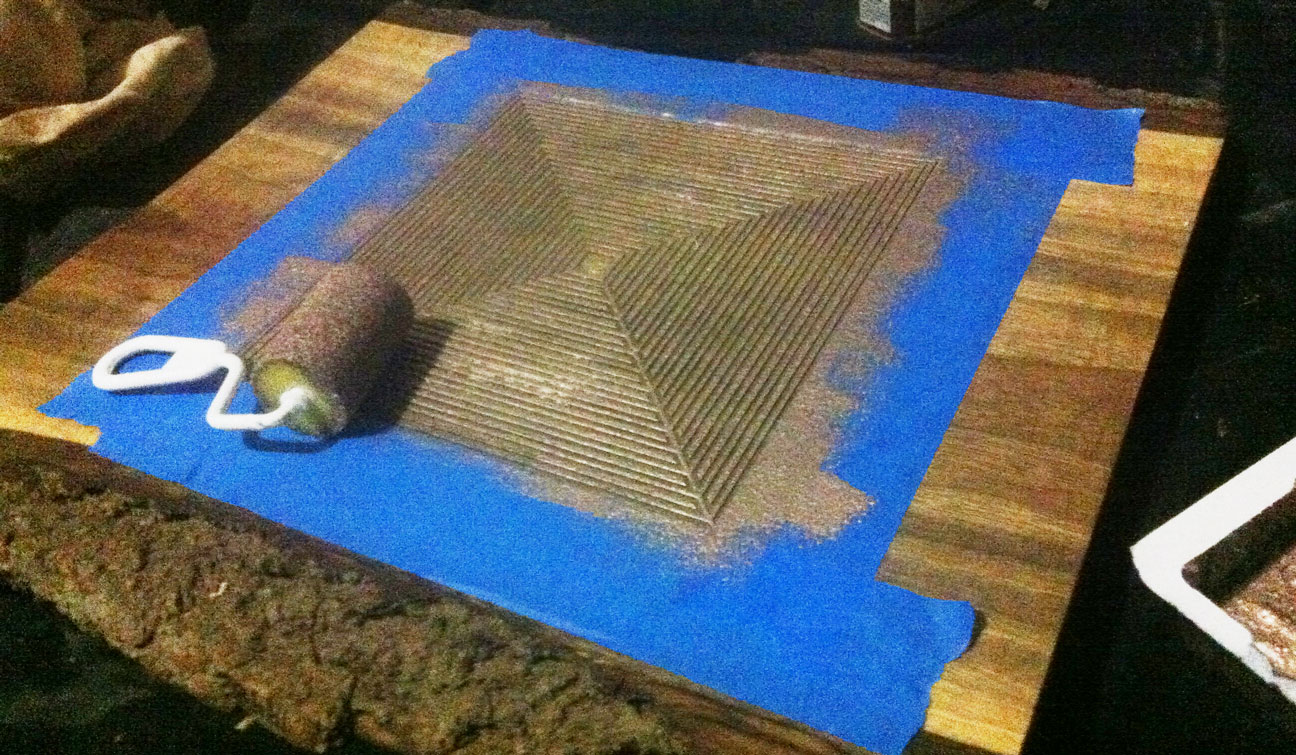 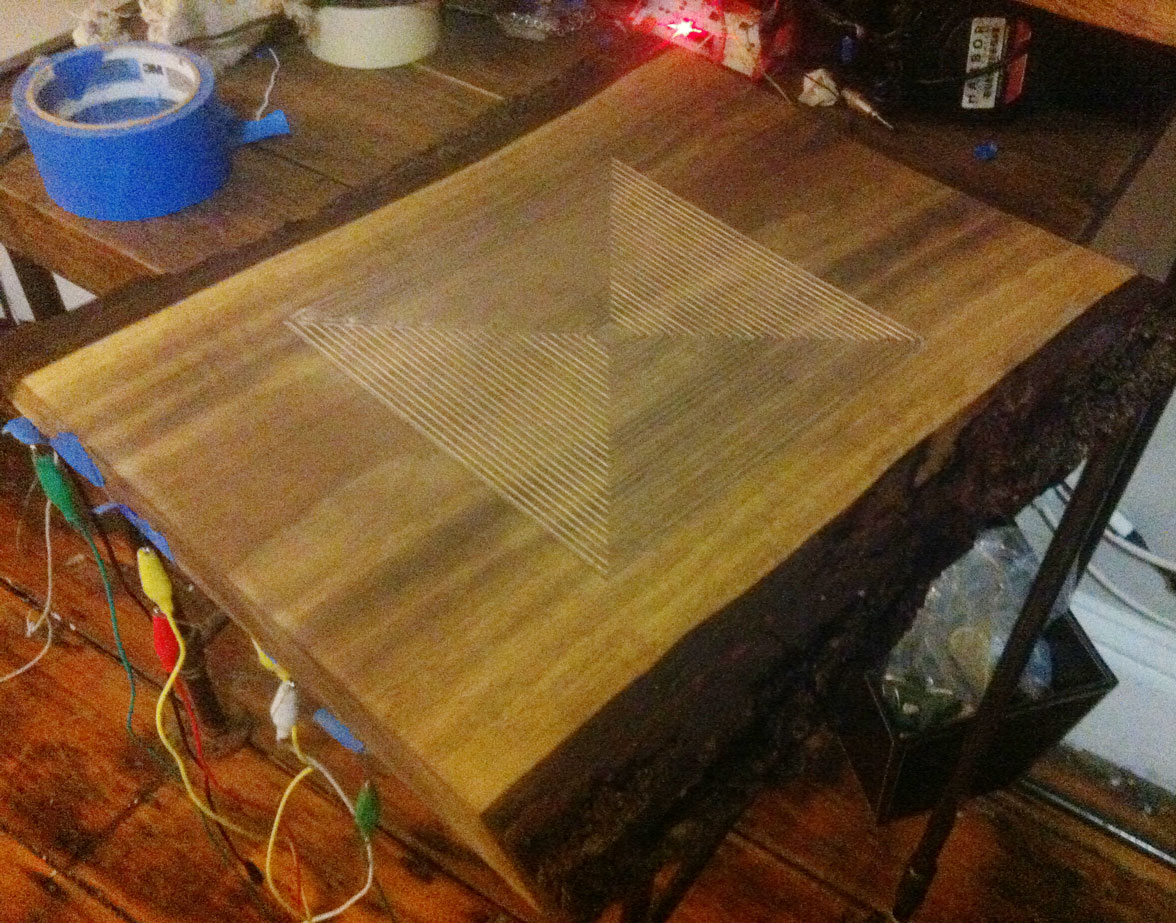 The purpose of this project is to create an artefact for the purposes of controlling a sensory environment. It’s a wooden slab, laser etched, with a copper overlay in a geometric pattern that functions as a touch circuit.

The slab is designed to reconfigure our typically relationships to technological control. Sociologist Anthony Giddens describes technology as having a disembedding effect upon people. By this he means a separation of ourselves from our bodies, time and space and that this is an uneasy condition created for economic expediency rather than a conscious desire to meet needs. It’s part of an investigation into re-embedding – bringing our bodies time and space to a focal point.

It attempts to reorient experience along the following lines

Using materials derived from nature or containing references to nature

Revealed circuitry rather than encased

Intuitive touch rather than utilitarian touch

Specificity in artefact rather than unsigned mass produced objects

Process
To make the underlying slab of wood I’ve cut a live edge piece of black walnut, my plan is to laser engrave the geometric pattern upon it. Then upon the raised edges I plan to coat the raised edges in copper conductive paint. 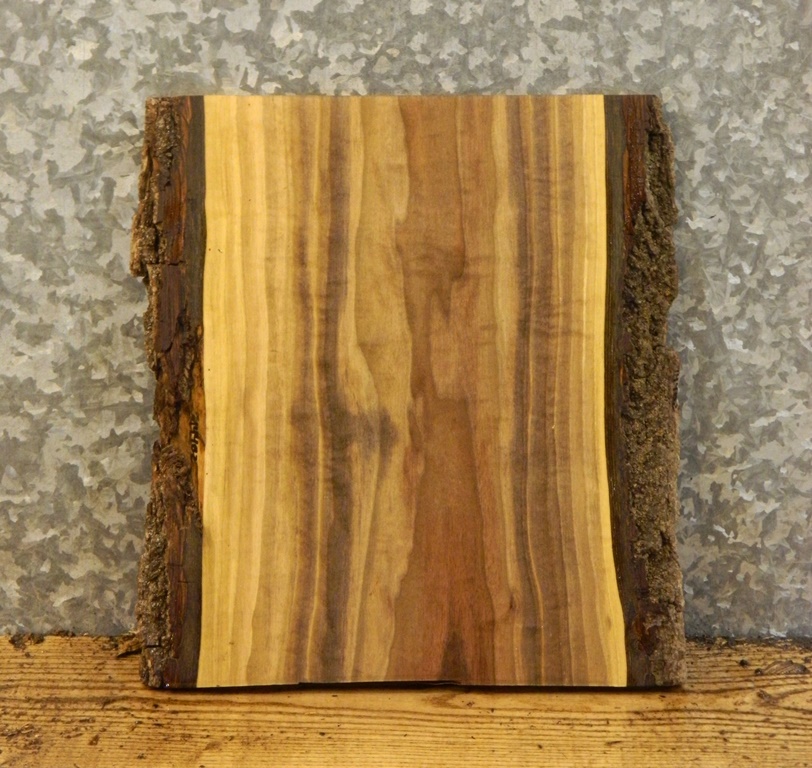 We speculate a distant future in which humans have transcended beyond the physical form of the body, though are yet to transcend the materiality of time and space. As such they exist as arrangements of information, in the form of energy suspended in an electromagnetic substrate. These post-human energy beings communicate via pulses of light between each other. 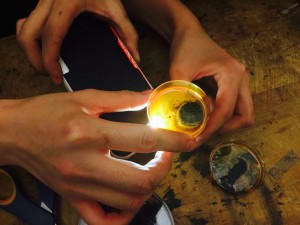 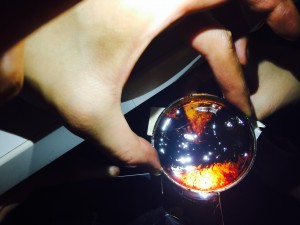 Identity can be complex, titles such as craftsperson, coder, educator and engineer seem to imply a professional identity that I wouldn’t identify with. Whereas maker, learner, gamer, storyteller seem more descriptive of activities on would enjoy doing. Thus I’m a maker if I like to make, but not a craftsperson if I like to craft.

My favorite tool is a smoke machine! Remarkably versatile when combined with lights to create all sorts of atmospheres.
I enjoyed the craft learning exercise, I think it reinforced the community aspects of traditional craft learning using shared knowledge. Which is something different and important than the same knowledge conveyed via a youtube video.

The end goal is to create a wireless controller using shoes as a switch.

For the wireless controller part I decided to hack a mouse instead of a keyboard for the smaller form factor. Opening up the case, you can access all the click functions underneath the PCB by soldering directly on to the relevant terminals. Video below –

The Makey Makey simulates a keyboard when a keyboard is connected, it’s different to a hacked keyboard though in that it’s calibrated to pick up currents over very high resistances allowing minimally conductive objects to function. 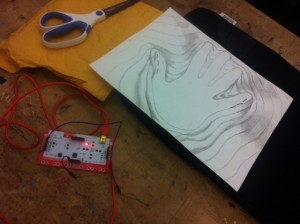