At this present time, people tend to forget their identity and view of life because of their environment. This being the different people who surround us, the fast-changing technology and society that force them to move forward too quickly. People don’t have much time to think about who they really are, what they like to do, and consider what they really want to do. Sometimes they forget about these  thoughts in their daily lives, and are likely to just blend into their environments.

For the final project, we will make a memory box for people who need to be reminded of their beliefs and identities. When a person touches outside the box, the sound and voice will play by showing the images from their memory on what they want to be reminded of. During a person listens to the sound and voice in the box, the images on the memory box will fade away. That means the images are being absorbed as memories to the person. It would be private enough that each person could keep the memory inside the box, even though the images are displayed outside of the box which other people can see.

This project will use a soft sensor, soft circuit, Thermochromic Pigment, and magnet to represent the memory and to make the sound speaker. When the box senses someone expecting to get some experiences, it can use the body heat and heart rate of a person to reveal their memories as images.

We got good feedback from our classmates and professor. They told us it is a good concept and idea. They asked us where to install the memory box. We decided to place it in the living room because it is the center of the house and a comfortable place. The images that will be shown on the box will be abstract, which is not too obvious and better than real pictures or exact shapes.

People want to share their memories with their pets, but are likely to forget. In the future, people can share memories with their pets using the Pet Pillow. It is designed with soft and cozy fabric so that their pet can feel comfortable. When the owner touches the back side of the Pet Pillow, the sounds that they want to remember will play in order to share both moments and emotions. 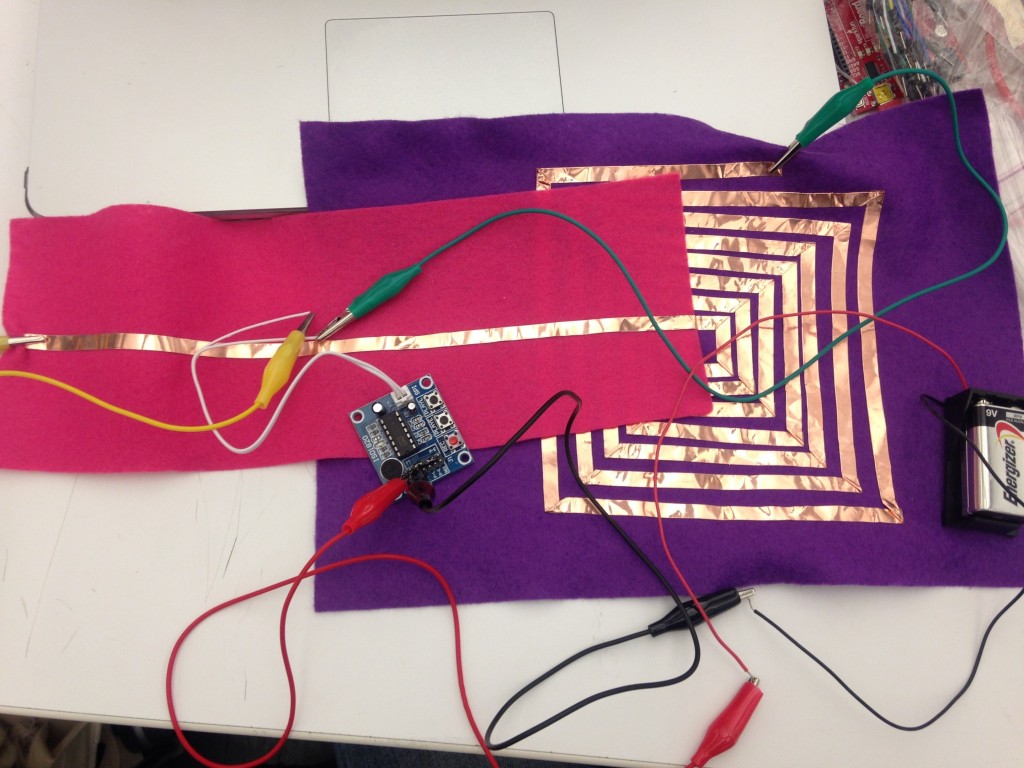 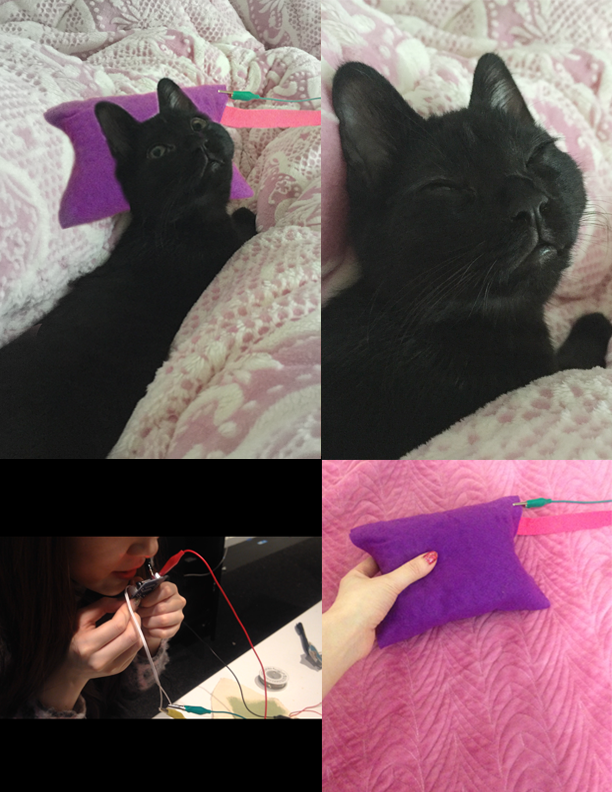 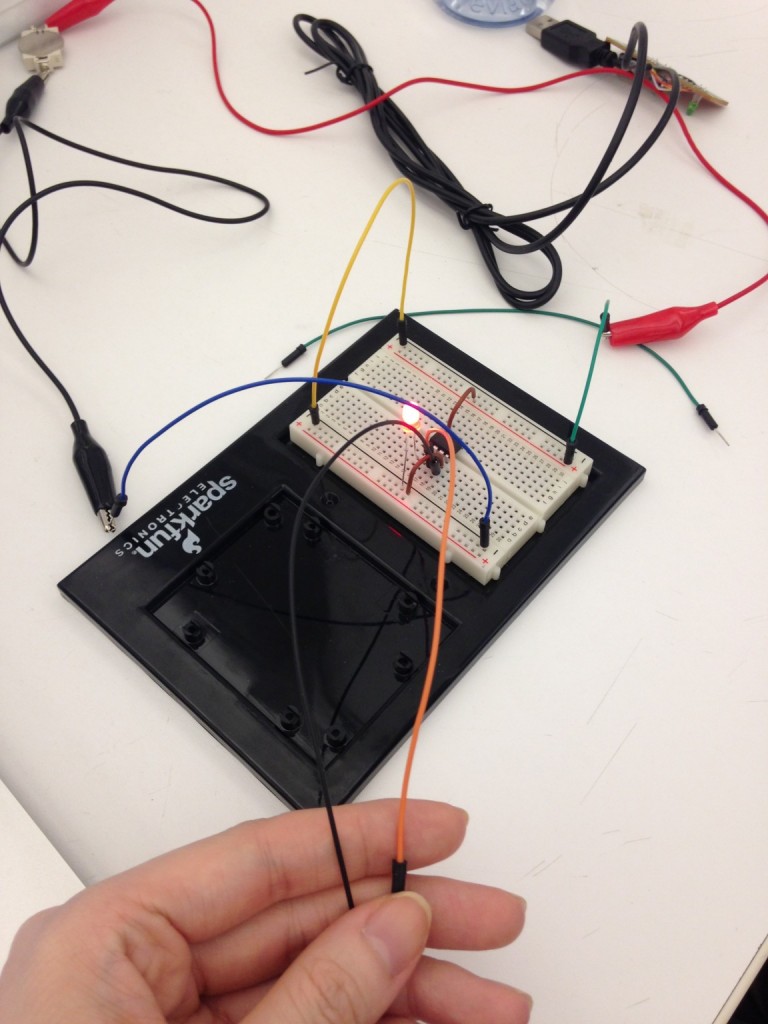 Whenever people grab the cup cover, the LED light turns on.

The four alien guys want to say something to each other at the same time as the button is being pressed, so we can’t hear what they are saying. You can give one of them the opportunity to speak randomly by unpressing the button, then the selected guy can say what he wants to say.

I am a designer who loves sketching, drawing, making things, and conceptual thinking. My background is in graphic design, but I’ve always wanted to be an artist, and called myself an artist until I was an undergraduate. I know there is no strict boundary between art and design, but I think I became a designer because I had more opportunities to do practical designs in the aspect of business rather than expressing my feelings, emotions, and philosophy in design. I think I found that I enjoy doing practical designs to solve some problems or to create useful services, packaging, and products for people’s better life. I like helping people with creative designs. I believe that creative designs make people happy and help make their life better. That is why I love design and I identify as a designer.

My favorite tool is scissors because I can create anything that I didn’t expect, and it gives me a feeling of freedom and pressure at the same time. The reason I feel this way is because scissors are a very simple tool but it is never a easy tool because it is dangerous sometimes. The most interesting thing about scissors is that if I cut something with scissors, then I cannot go back to the beginning. It is a simple tool but should be used carefully. It makes me think twice about everything before doing something.

I really enjoyed learning a different craft last week. I think sharing skills by demonstrating and active hands-on was a very effective way to learn various new crafts quickly. I never knew there was a variety of fun hands-on crafting if I were not taking this class. It was fun and I also enjoyed taking orientation for wood working with my group. I wanted to try wood working before but I haven’t had the chance to do this because I mostly work with my laptop, even though I love making things, but thanks to this class I made it. Teaching what I’ve experienced was satisfying, but It was a shame that I couldn’t push more to do this for others because wood working was really fun. I liked active hands-on craft processes but the only thing I was frustrated about was that I couldn’t follow crocheting… I need more time practicing to get familiar with it. 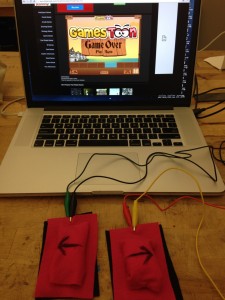 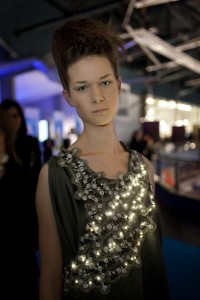 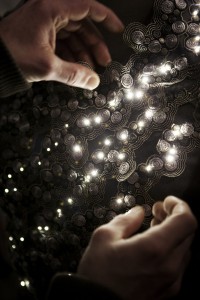 It is a beautiful pollution sensing dress. The most fascinating function of the dress is that the CO2 dress monitors the CO2 levels in a given environment and visualizes the data in real time with a flickering of light patterns.

Carbon Dioxide (CO2) is a colorless, and the carbon dioxide itself can cause headache, dizziness, nausea and other symptoms at high levels. It is very clever that people can realize the level of carbon dioxide through the dress in the space – slow pulsations when the levels are low, short and hectic when they’re high. The CO2 dress is functional and aesthetic. I would love to buy this dress for the environment!

The dress is constructed using soft circuit techniques including the Lilypad Arduino, and the LEDs are stitched into the embroidery of the dress.