For my memory project, I created a rectangular prism that represents both the act of remembering as well as the subconscious process of forgetting or fading memories. 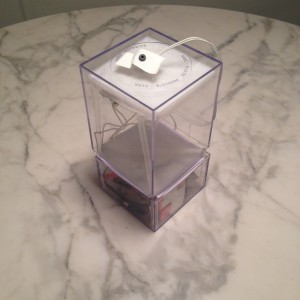 Much of our current understanding of memory looks to the chemical or material processes and physical structures that make up what we think of as the abstract concept of a “memory”. Memories are very real, very material things – they are believed to be a series of connections between synapses that are strengthened and weakened over time based on how frequently these memories are accessed, or rather how often chemical neurotransmitters and electrical currents transmit across a unique pattern of synapses.

Synaptic plasticity allows for us to strengthen memories through the use and reuse of synapsis as learning continues, previous thoughts and concepts are associated with new ideas, and the past is remembered. This strengthening has a material basis, with proteins being built or modified to increase connection strength between synapses. In the case of memories, the old idea of “if you don’t use it, you lose it” is believed to be true: If a memory is not frequently attended to, strengthened, or associated with the present, it weakens. The mind has a finite amount of resources, and maintaining an infinite amount of information – treating the most mundane details of our lives as equally important as the moments that we most treasure – would be inefficient and exhausting. Thus, we “delete” old or unnecessary memories from our brain, giving priority to those thoughts and ideas to which we refer to most.

This is a brief overview of the idea behind my project – that there is an ephemeral, material component to memory, and this “memory-matter” degrades over time as we fail to attend to it.

To test the heat circuit that you’ll be making, it’s helpful to prepare a small swatch of thermochromic pigment (material that will change color as it heats up) mixed with a clear medium (I used Modge Podge).

The circuit diagram for the heat controller was found at the eTextile Summer Camp website. They’ve generously provided the following Fritzing diagram: 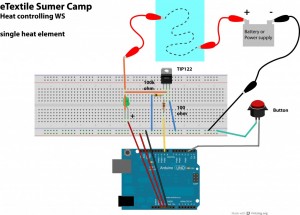 This was the same circuit used in this project. The following video shows the circuit in action heating up the thermochromic swatch that was previously prepared: 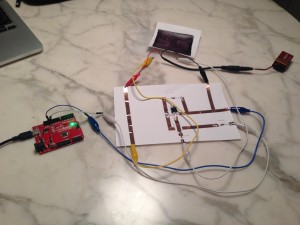 (read more for the code)