I made this  Rusalka Headdress and here is the instructable!

The Leaf Faerie Headdress is inspired by the Russian Rusalka Myth. Rusalka came out of the water in the spring to transfer life-giving moisture to the fields and thus helped nurture the crop. However, Rusalka had a dark side, and if you came to close to the river, they might drown you. The headdress transforms from a whimsical and magical garland to an eerie glowing headdress in the dark. Much like the light and dark of the Rusalka. 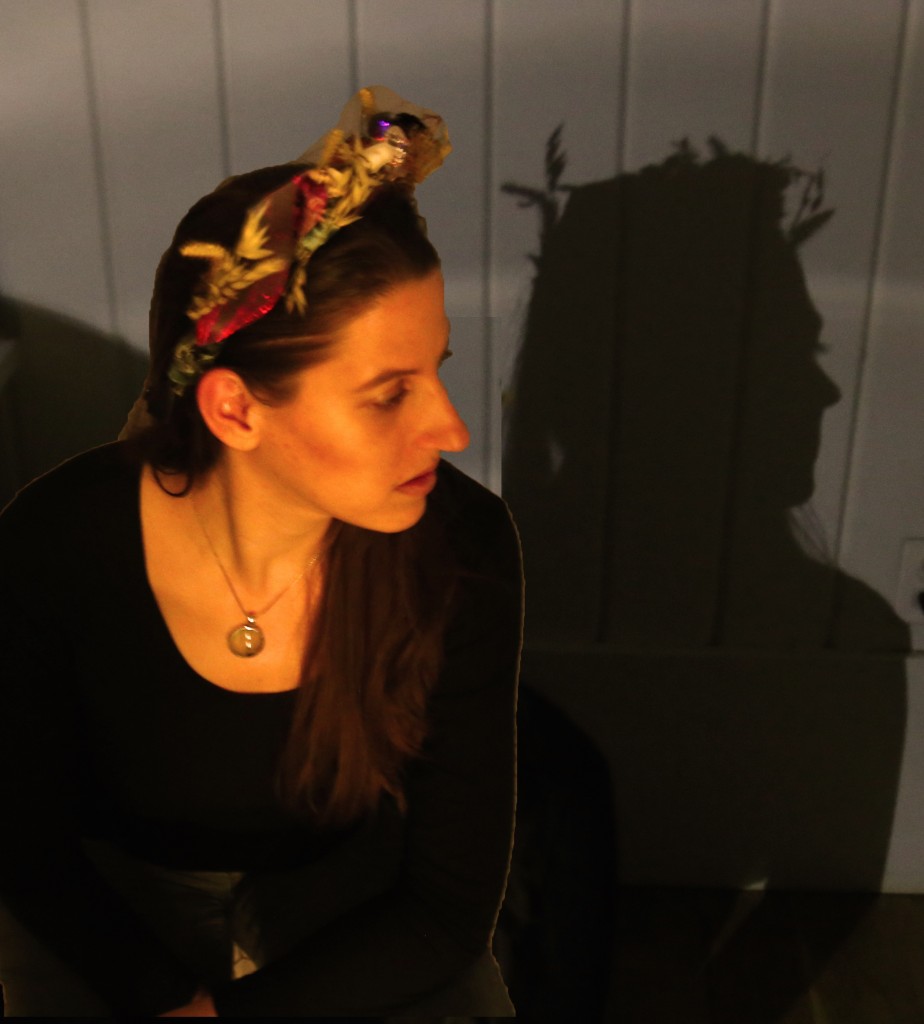 Denah and I trained a piece of flexinol by wrapping it around a pencil and heating it up. Then we sewed it into the hem of a black dress. we sewed some red string so that it would be easier to see the movement. We connected the ends of the flexinol to alligator clips and to the positive and negative sides of a battery. Watch it move! 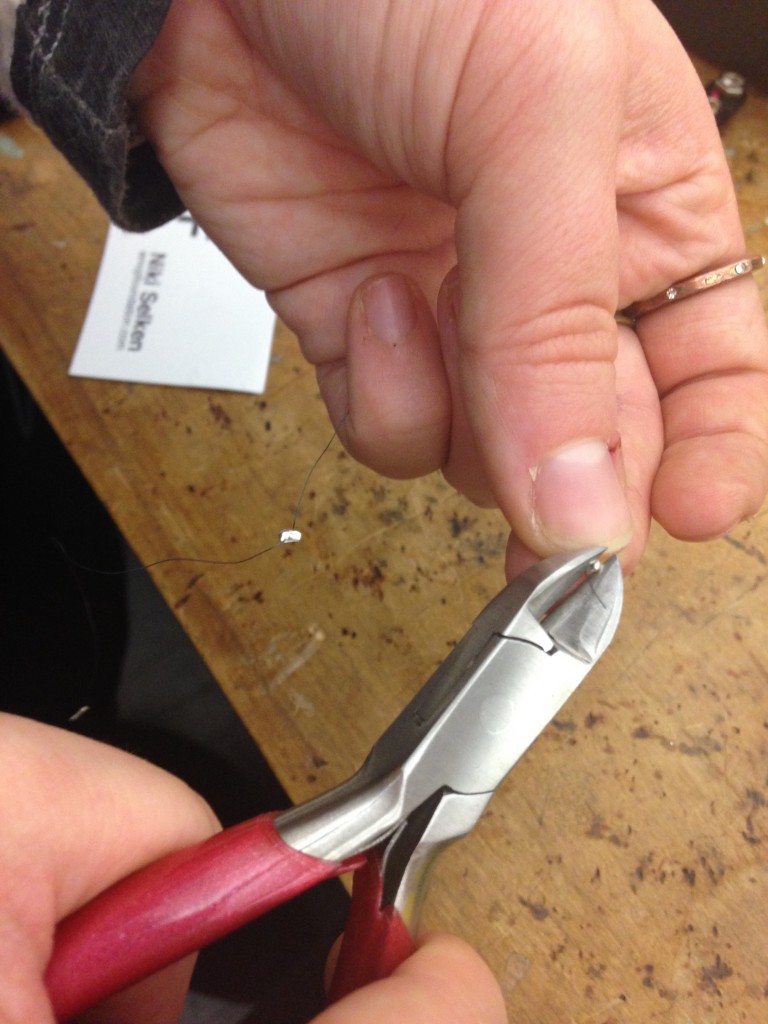 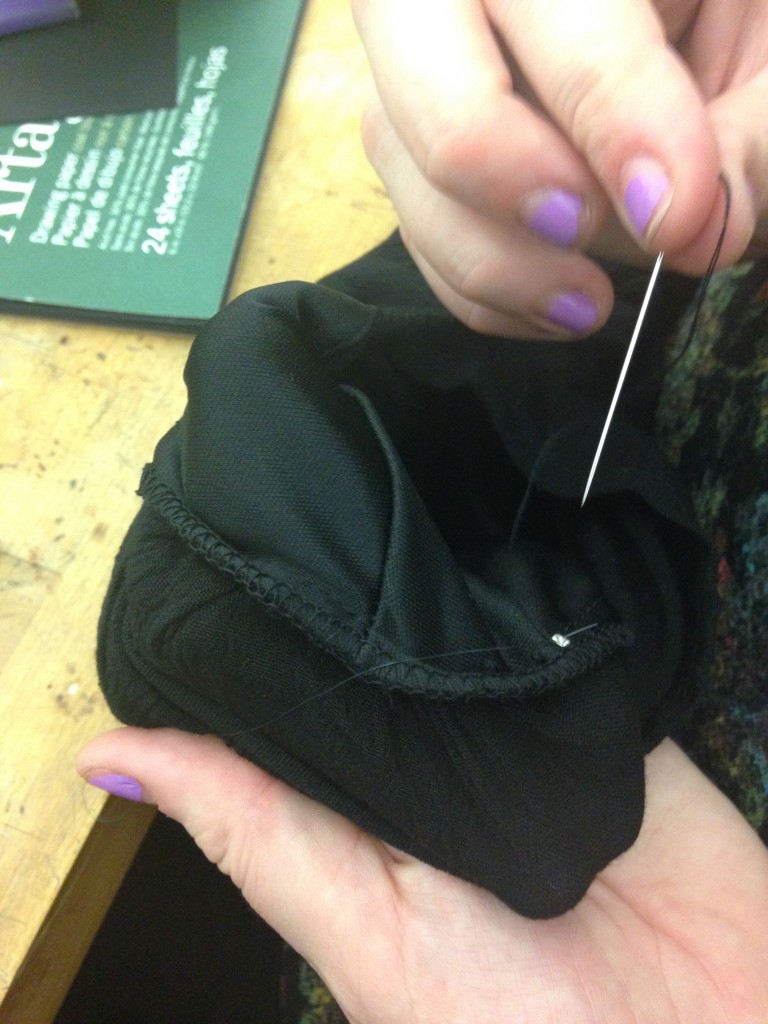 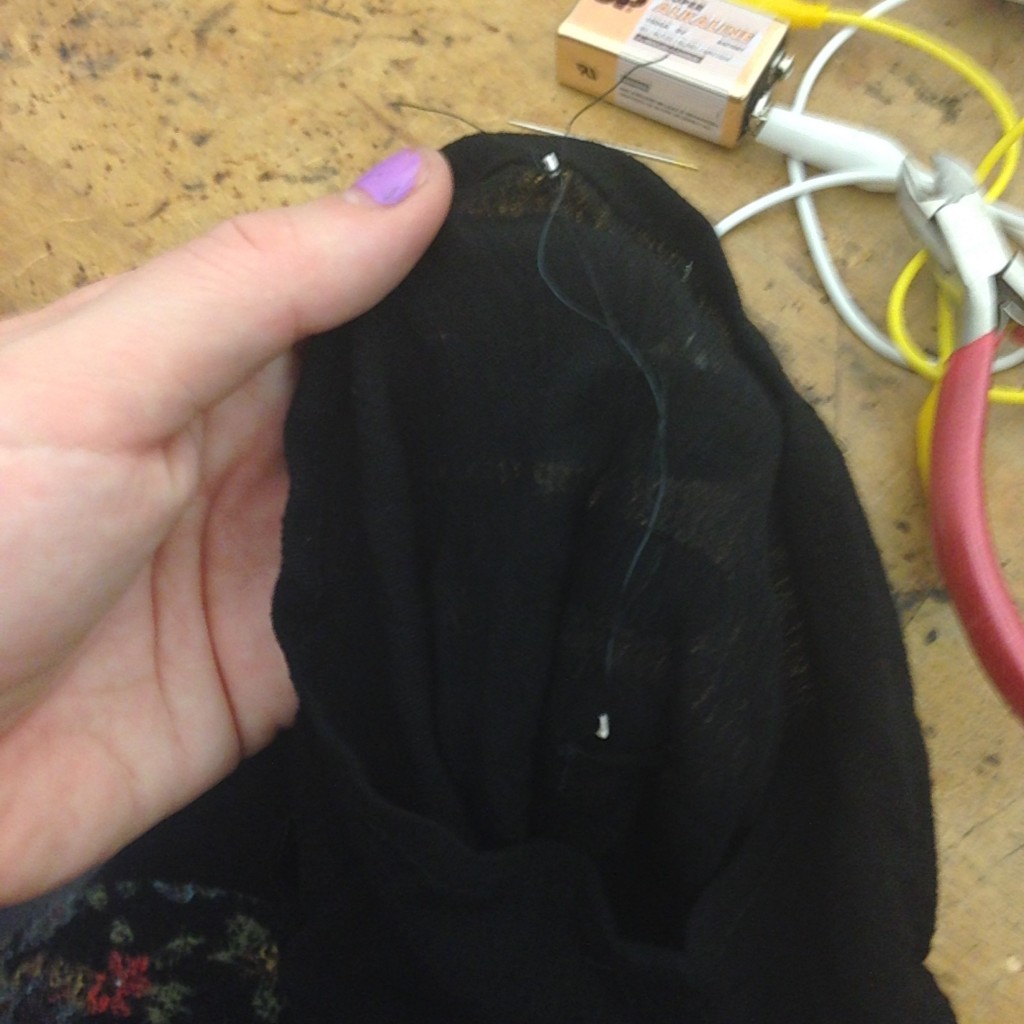 My project was a second iteration of my firefly lamp. I wanted to make a jar of fireflies that felt more organic than the first one I made. I also wanted to make the switch as simple as a turn of the jar lid. I wanted to create a magical feeling of organic and glowing objects. This object could function as a nightlight or centerpiece for an indoor or outdoor table-setting. It is for anyone who likes mysterious and magical objects. Check out my instructable on how to make it! 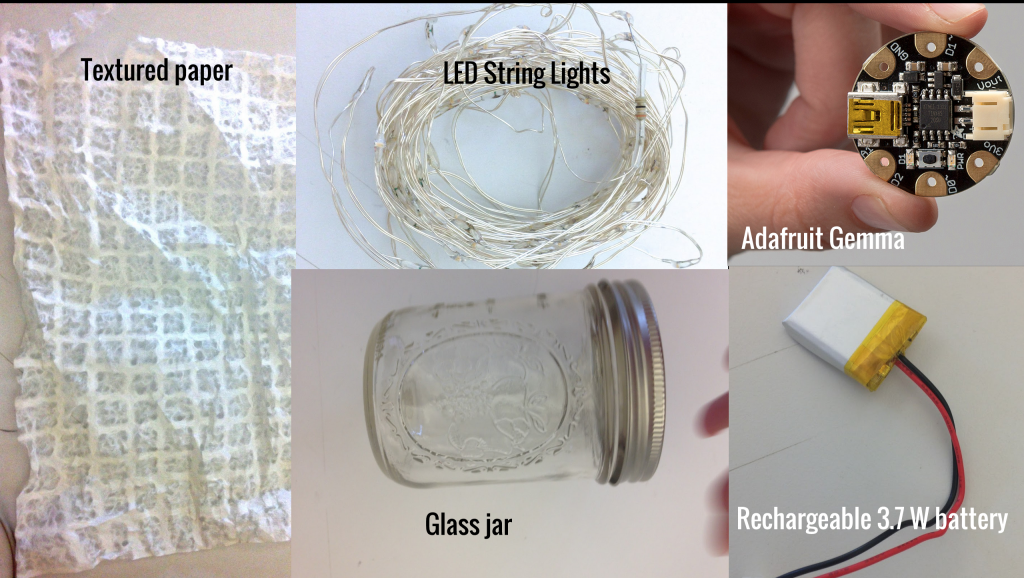 The biggest challenge was finding out what kind of resisters to use with the cut up light strings. I read on some forums and discovered that 47 Ohm resistors were needed. I then soldered them to the positive leads of each light string before connecting that to the Gemma. then I had to attach copper tape to the lid rim on the inside. I also soldered the negative lead from  the battery cable to copper tape and placed that in the lip of the jar. So when someone closes the lid the two copper pieces make contact and that completes the circuit to send power to the gemma and start the lights going.

The Firefly Jar is made with Arduino code programmed onto a Gemma. I also used LED string lights from Sparkfun, copper tape, glue, paper, solder, a rechargable 3.7 V battery and a Ball Jar. The light turns on with a twist of the lid. Code on Github. 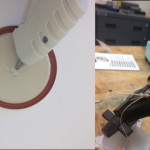 Gluing the Gemma to the lid 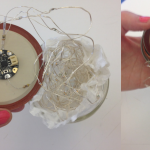 The lid prepped and attached to the lights 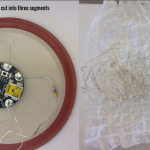 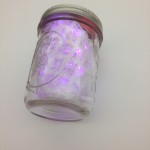 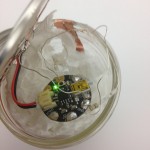 I wanted to create something that reminded me of a living thing from nature. So I thought about fireflies, which I have only seen in movies. So I imagined what it would look like if I caught some in a jar. That is what I made.

This jar of fireflies is made with an led strip, Gemma, battery, wire, paper and a jar. It turns on as the jar lid closes. Code available on Github.

I have struggled to use a paper hand drawn image with graphite to complete a circuit. I have the notion that the darkest and most covered surface area would create the brightest LED, by having the least resistance. I also wanted to test weather I could use a more complicated image, like a tree to light up the LED at a greater distance from the banana clip to the LED pin.

To test this I created three hand drawn shapes. A rectangle, a heart, and a tree. I tested with one banana clip connected to a 3 volt coin cell battery on the positive side to the positive LED leg and one clip connected to the negative side of the battery. The drawing on white paper with a pure graphite pencil then acted as a resistance sensor and completed the negative side of the circuit. I found that my hypothesis was partially correct and the rectangle and the heart both created bright LEDs. This means that both of them had less resistance than the tree image. The tree only gave the faintest light to the LED, and that light got dimmer as I moved up the branches and further from the negative clip. This tells me that the graphite has some resistance and the thinner the lines of graphite, the more energy is dropping off of the circuit.

I also tried it in various configurations, the only one that worked was having the positive side of the LED connected directly to the battery with a clip and having the negative side passing through the graphite and paper. 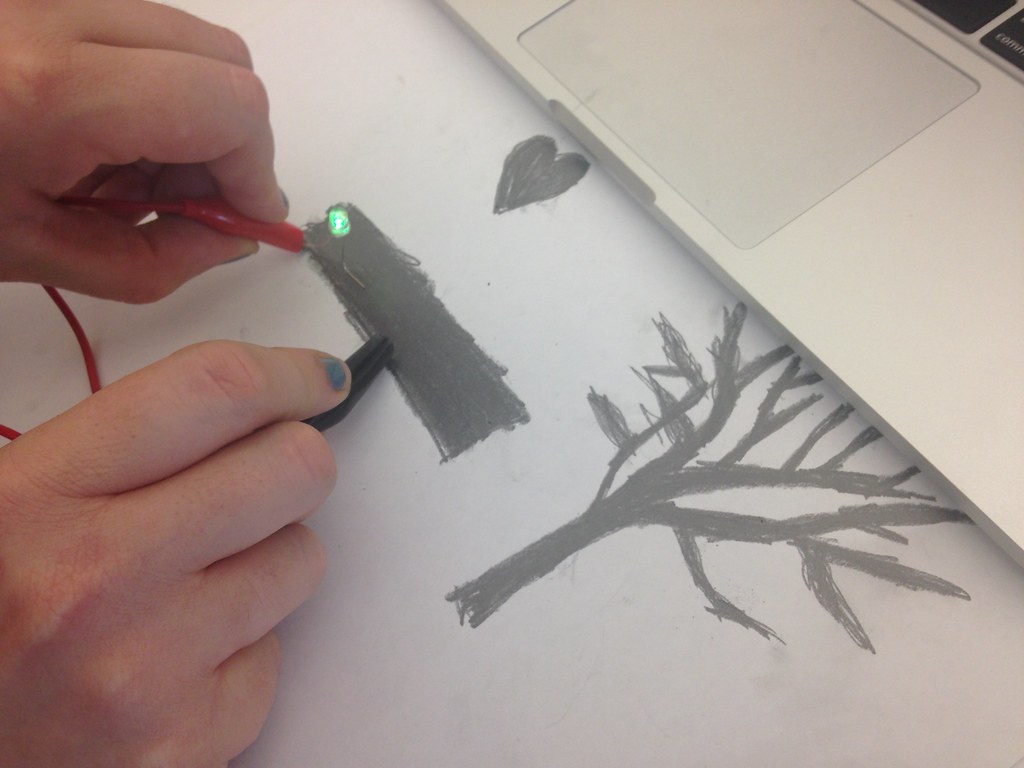 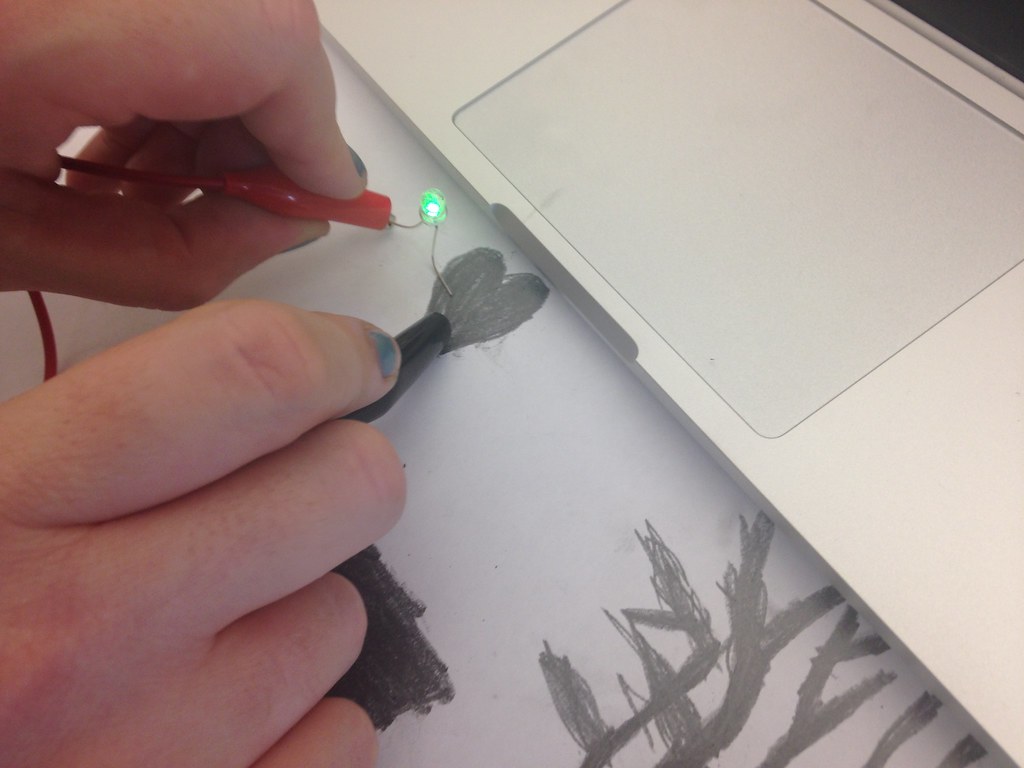 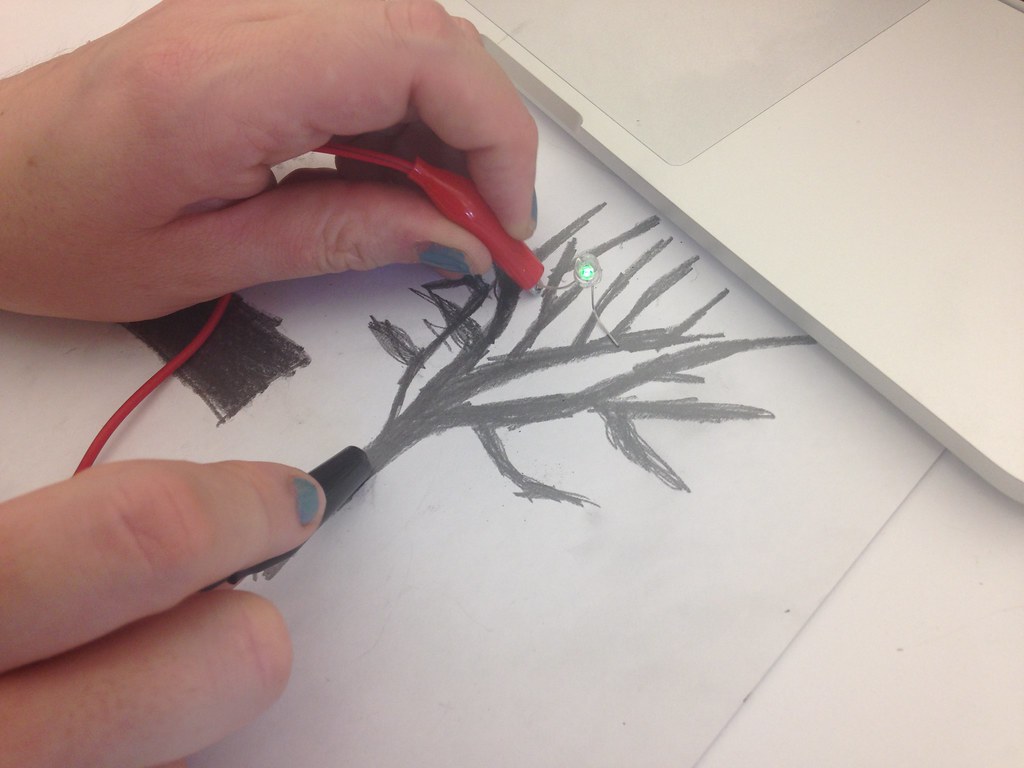 The Tree: The LED got dimmer as I moved up the branches.

I made three switches. The first was that I added a switch to my drawing. 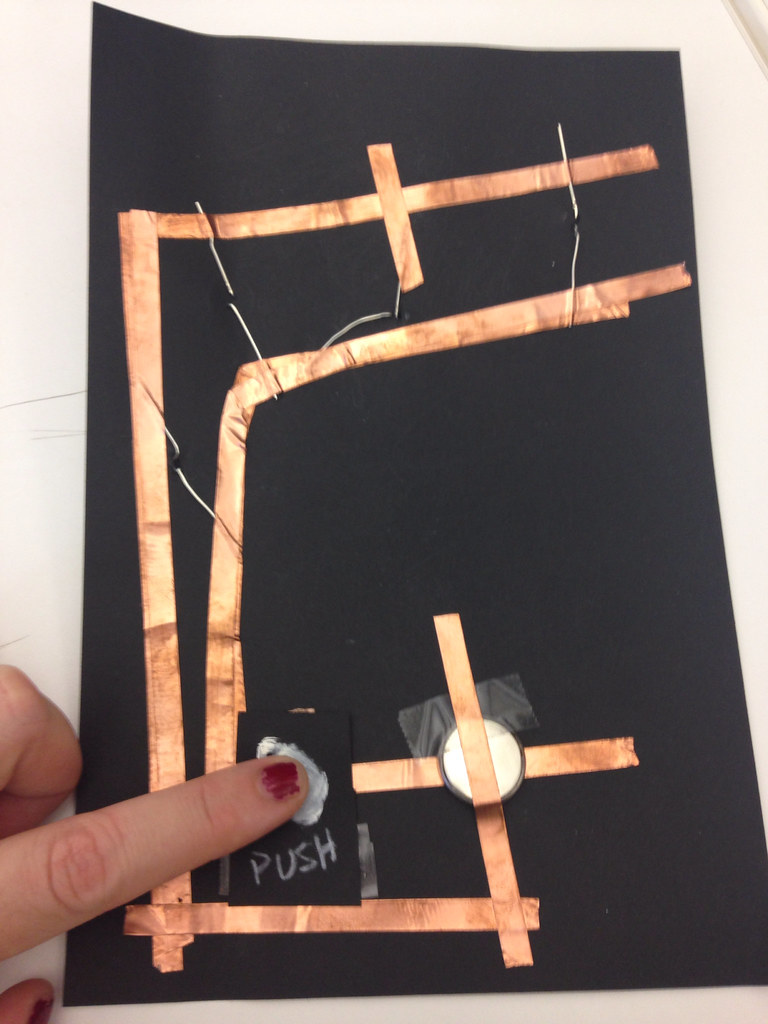 My second switch is a pinching an flapping switch. A little black bird made of paper that is an LED switch.

My final switch is a fan and uses the opening of the fan to trigger an LED. More info about the fan on my blog. I created an illustration of a short poem that I love by a friend and poet, William Taylor Jr. The picture is hand drawn with pencil. The lights are made with 3 purple and one diffuse LED on black paper with copper tape and a 3 Volt battery. 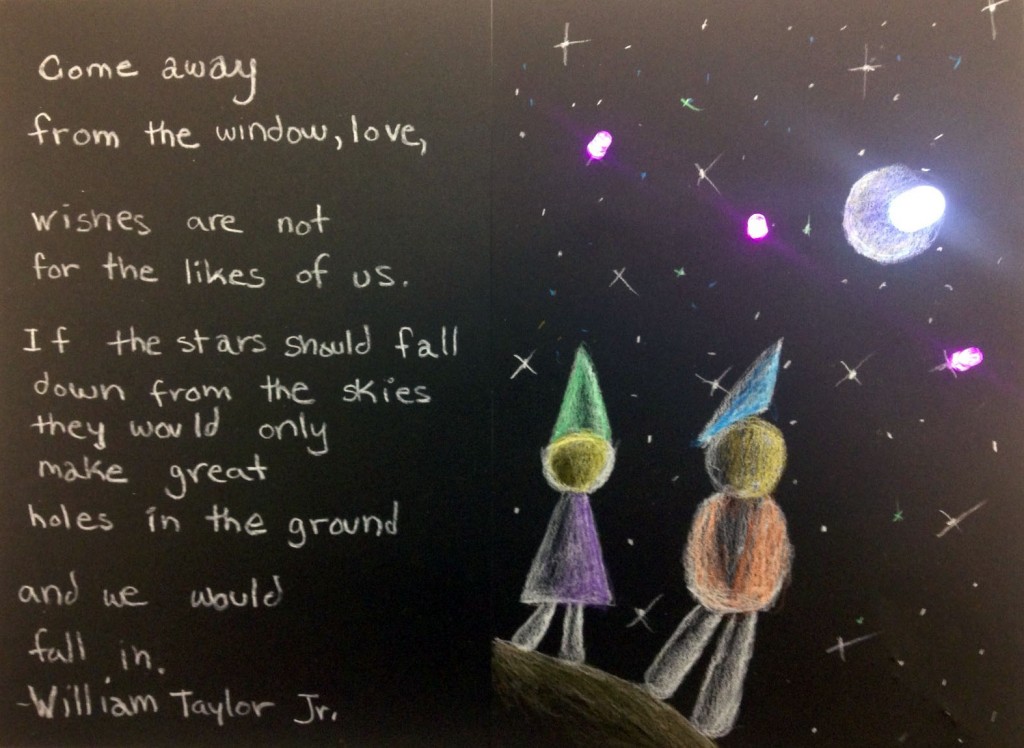 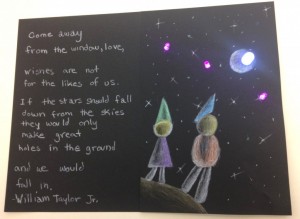 Niki and Denah used wire and copper tape in a parallel circuit. We lit up two LEDs. Pictures below! 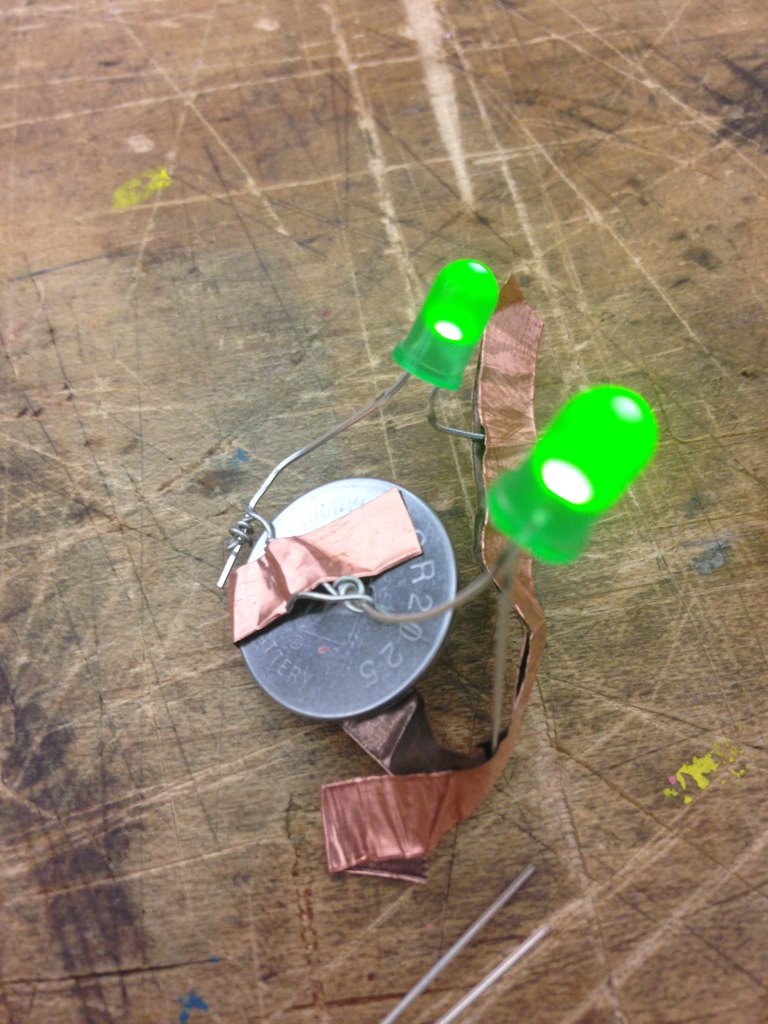 How to make Conductive Ink

Bioplastic Fantastic is a project that imagines how we can use bioplastics to create food for the future. It was created as a piece of speculative design by Joannah Schmeer. She uses these plastics with biological bacteria to make new more sensual and less technical looking designs . I am interested in her choice to think about design sustainability and future materials. Here is a list of the artworks: Image of the Instillation