For my midterm I plan to make a body bag.

What’s going to be inside? I don’t know yet. But our instructor Liza said that whatever should be inside, it has the potential to be powerful.

This is part of my thesis on violence. My original idea was that it would be a button that needs to be pressed to turn on a light. When I told Liza it would have a zipper, she told me to focus on either the zipper or the press.

“People I feel would be more likely to open a body bag zipper than actually touch it,” she said.

I spoke with classmate Audrey Fox who is a guru. She asked if maybe the teeth were conductive and recommended I take out a multimeter. 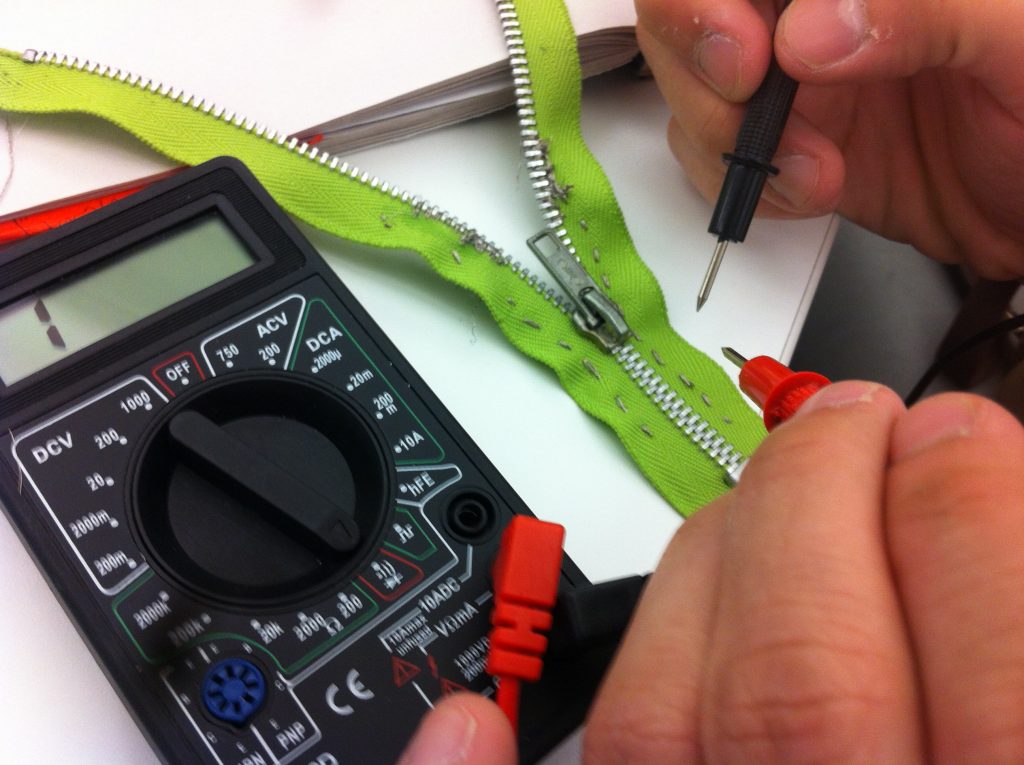 Connectivity. The teeth were conductive. Whereas… 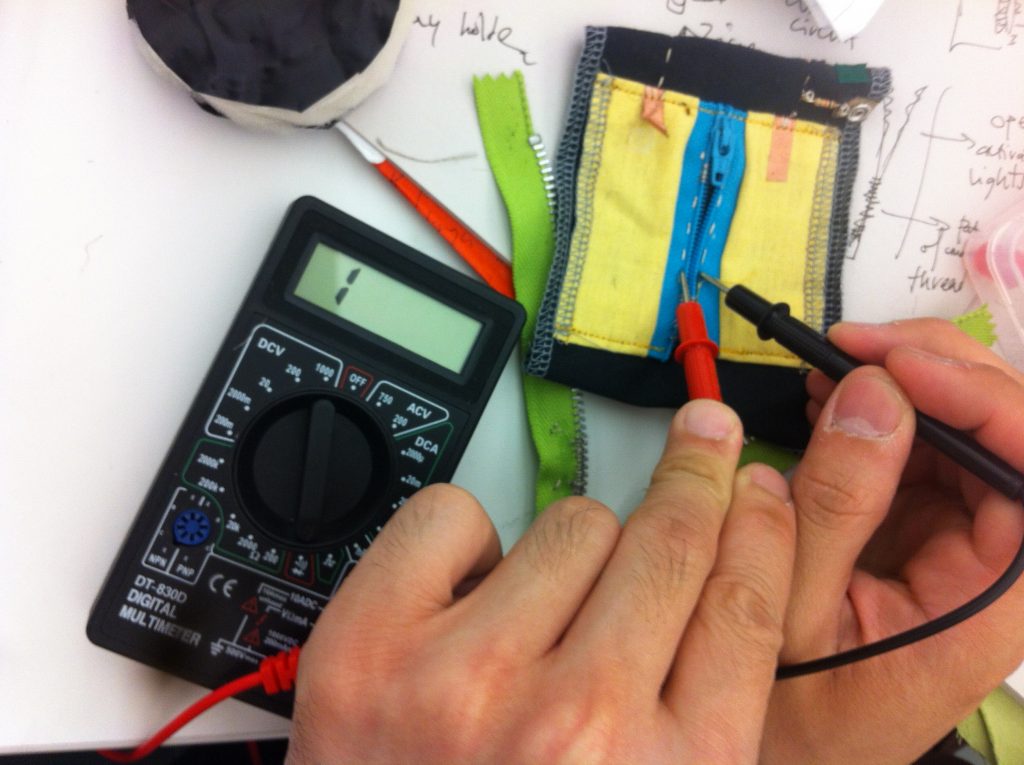 The zipper teeth in the swatch are not, because they’re plastic.

Wow. The answer was there in front of me the whole time. The circuit never would have worked. It needed plastic teeth to work.

I bought two zippers from Michaels. In a panic I took out the black one, and to my relief, THE TEETH WERE PLASTIC.

I’ll prototype the circuit with the black plastic teeth. 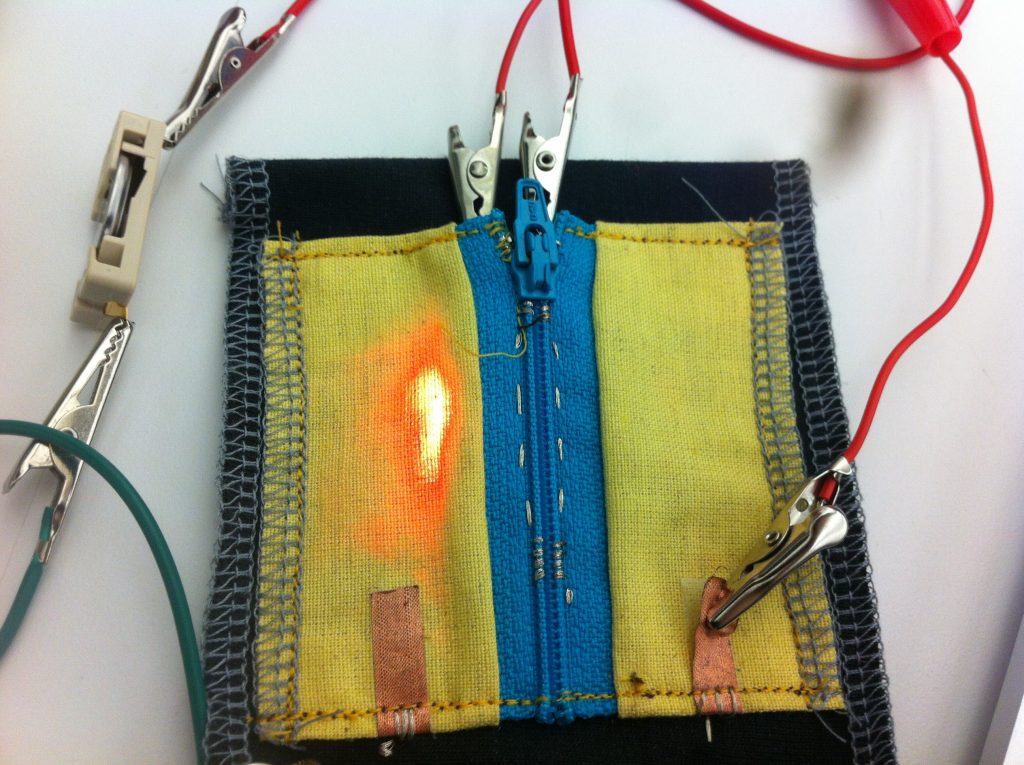 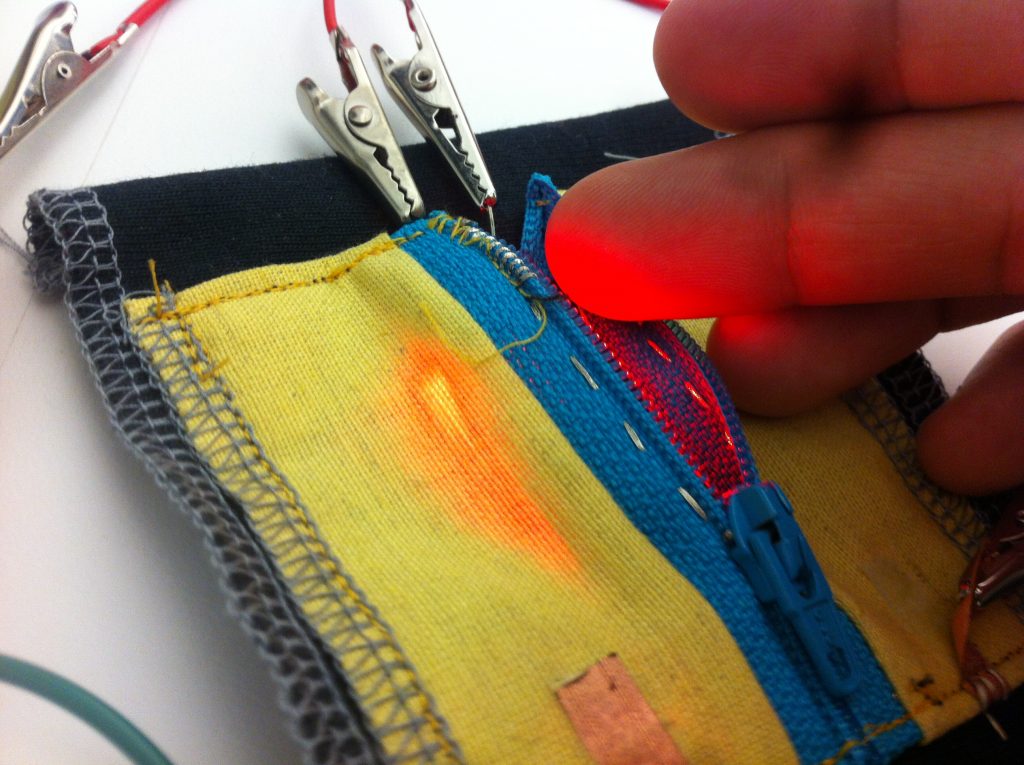 This is Liza’s zipper switch swatch. I borrowed it to study how to construct it. I want a creepy red glow to come out of it when opened. 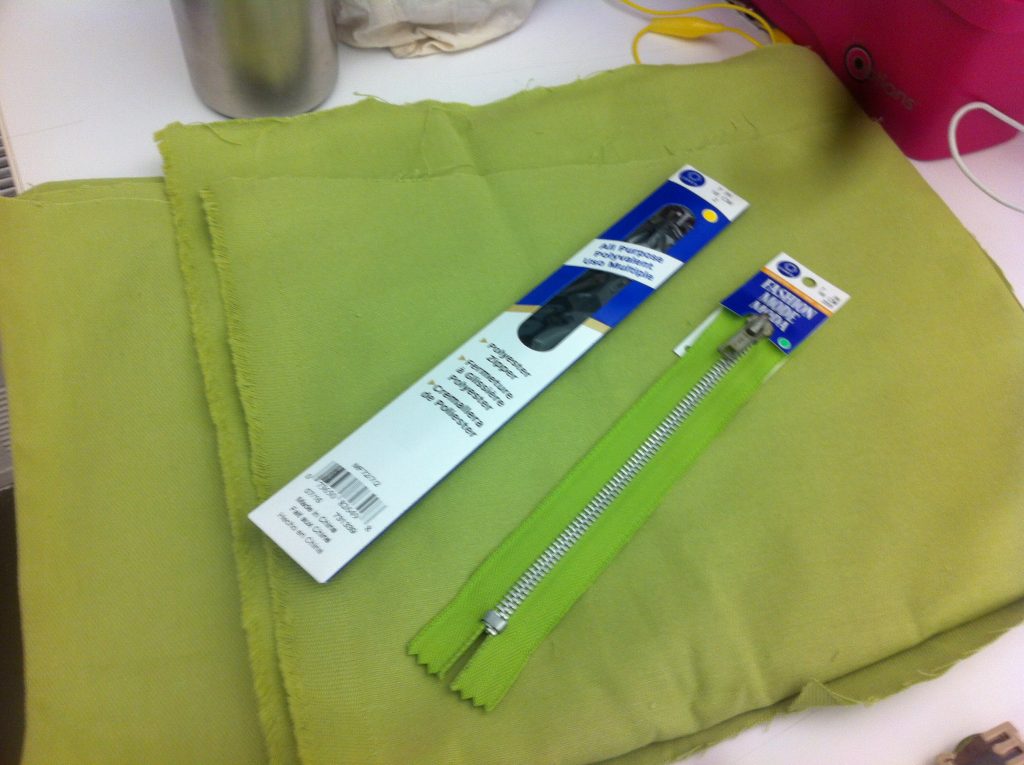 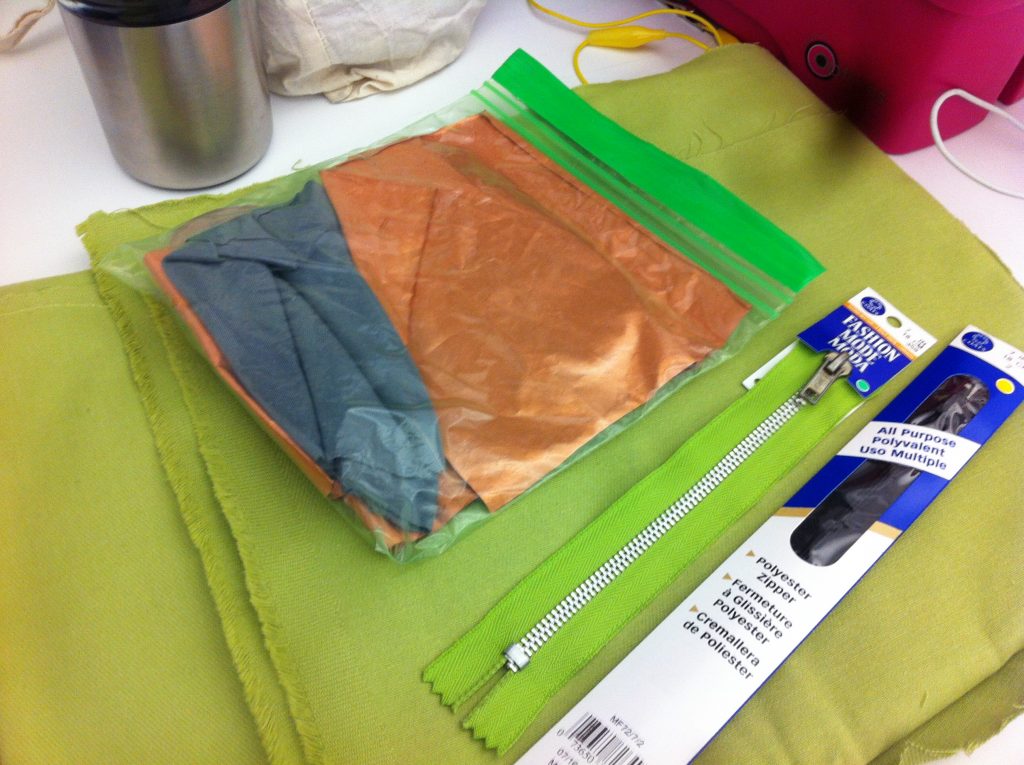 First, I bought a pair of zippers for prototyping. Since I had green fabric, I bought a green zipper. I needed to wind conductive thread between the zipper teeth to create enough conductivity to close a circuit. 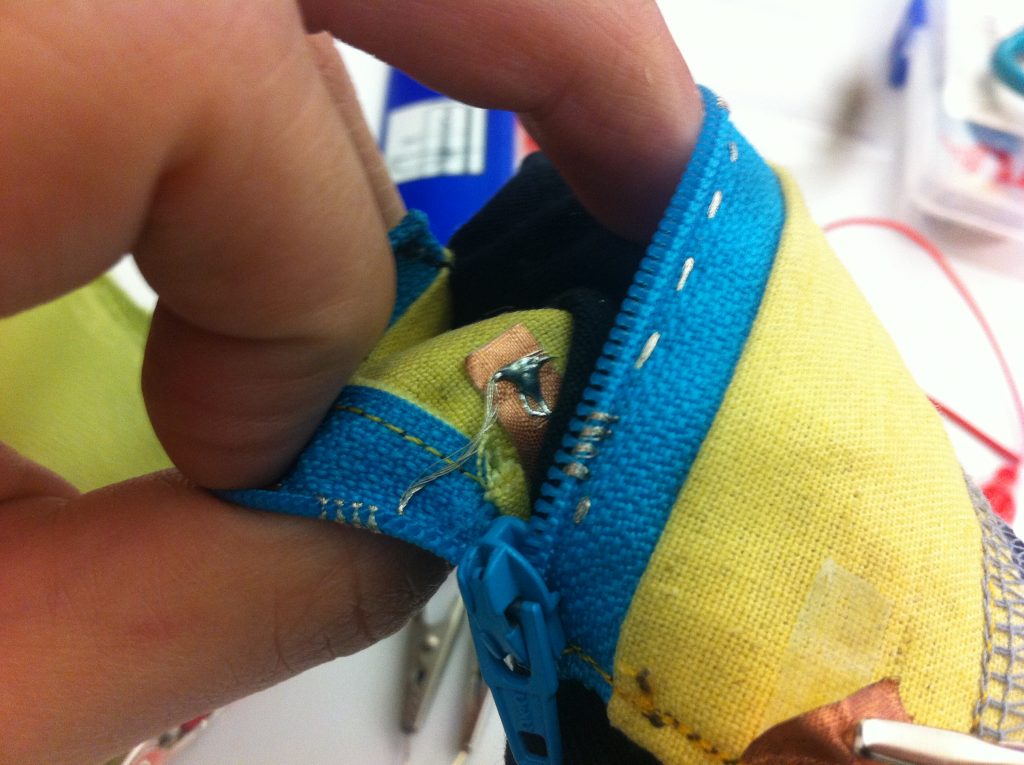 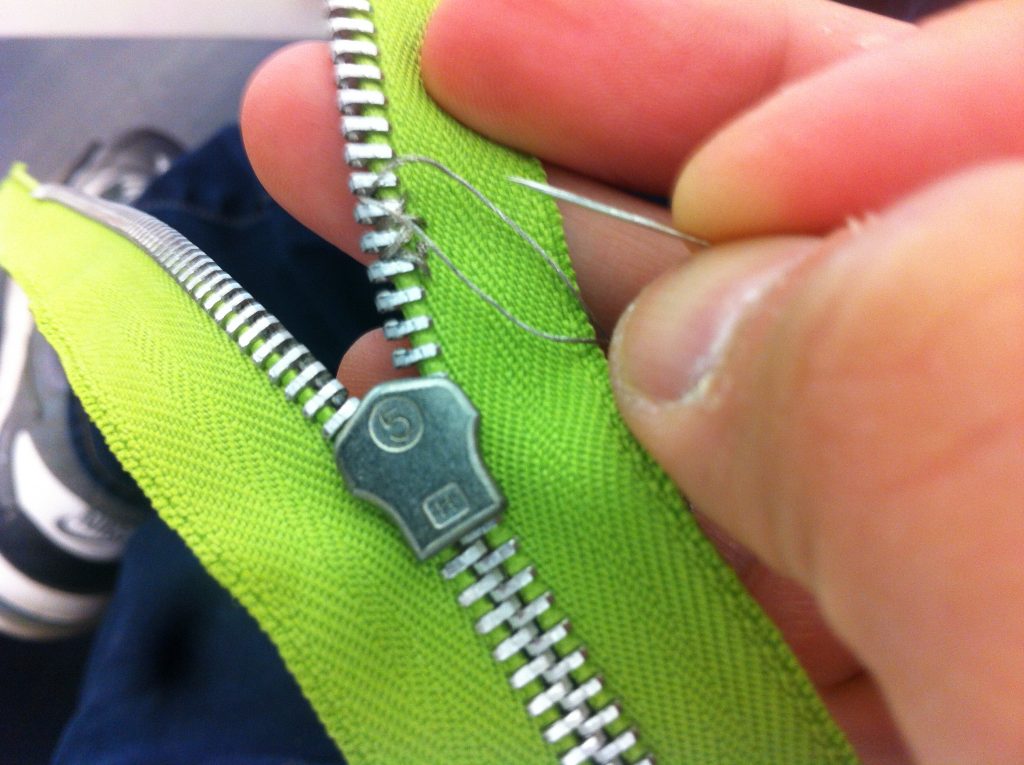 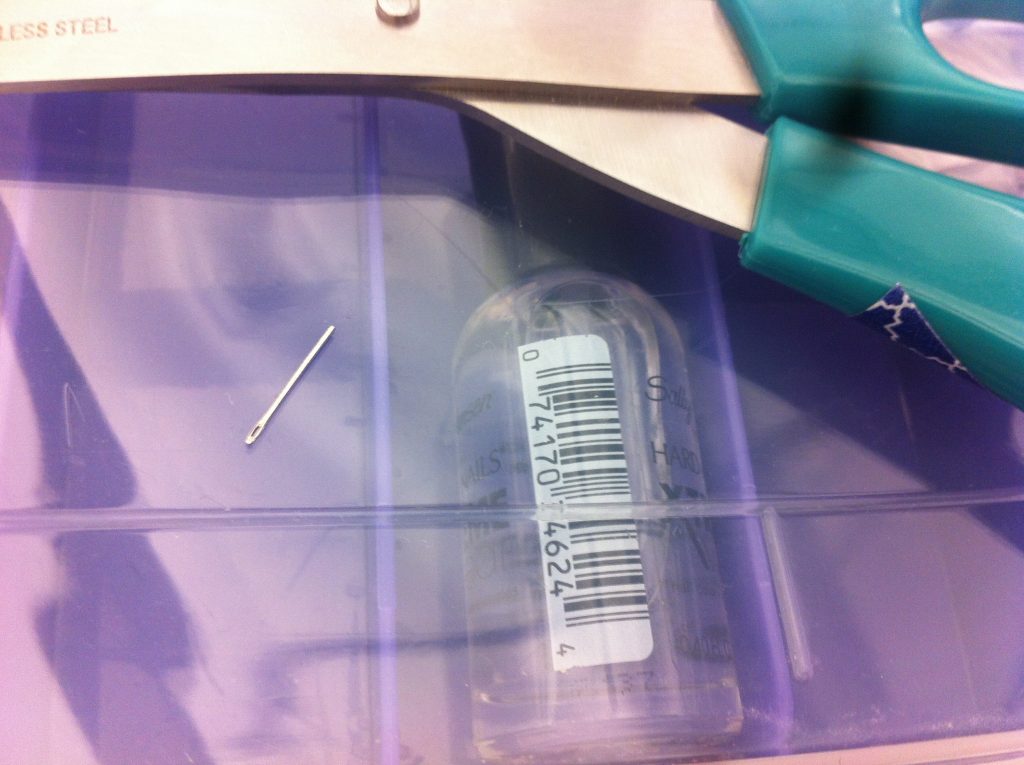 Threading conductive thread through a needle is annoying. The edges fray so easily. I read that I needed beeswax to clump it at the end. I didn’t have beeswax. I had hair glue. Which worked. 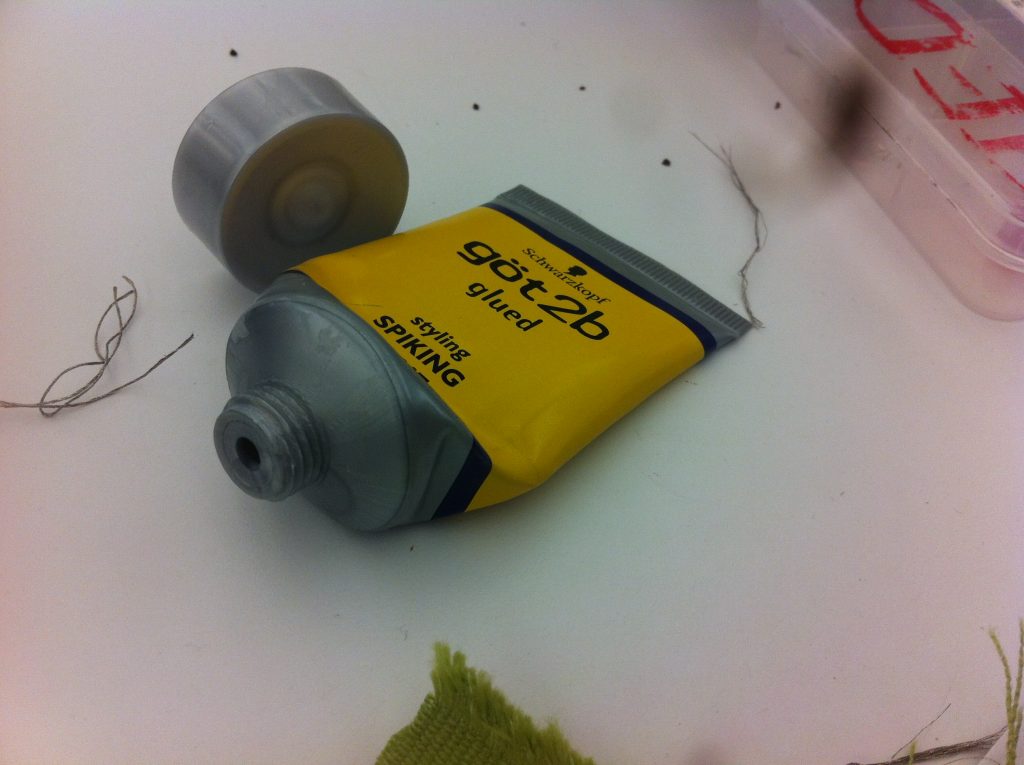 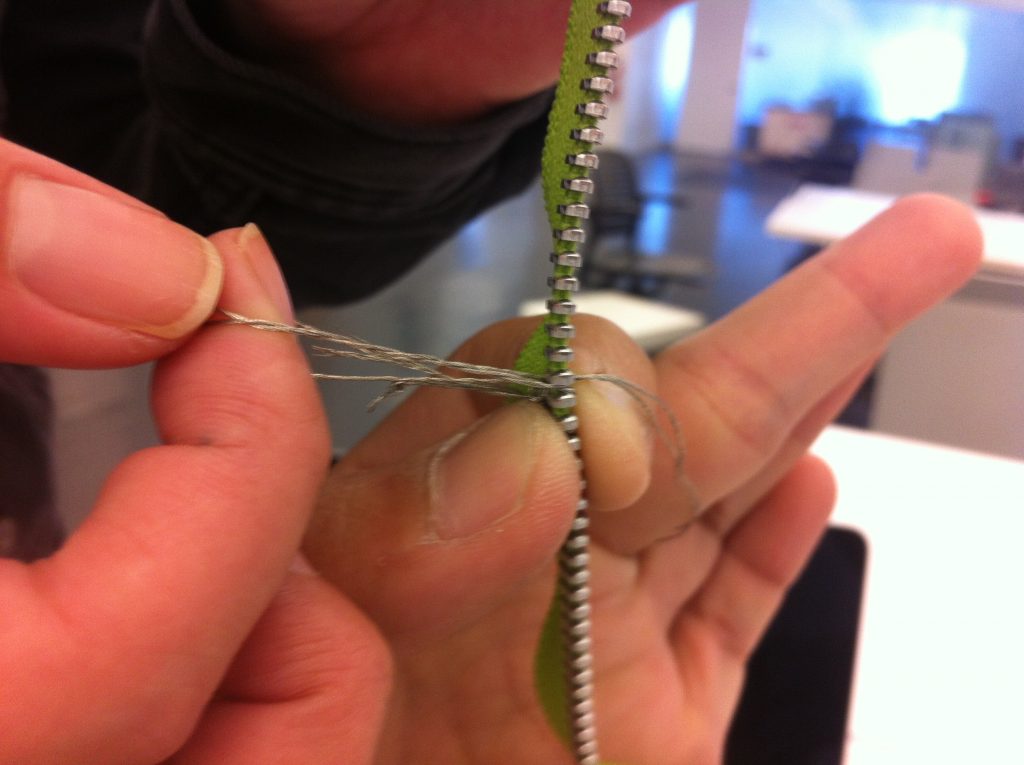 The thread kept getting frayed and stuck between the zipper teeth. 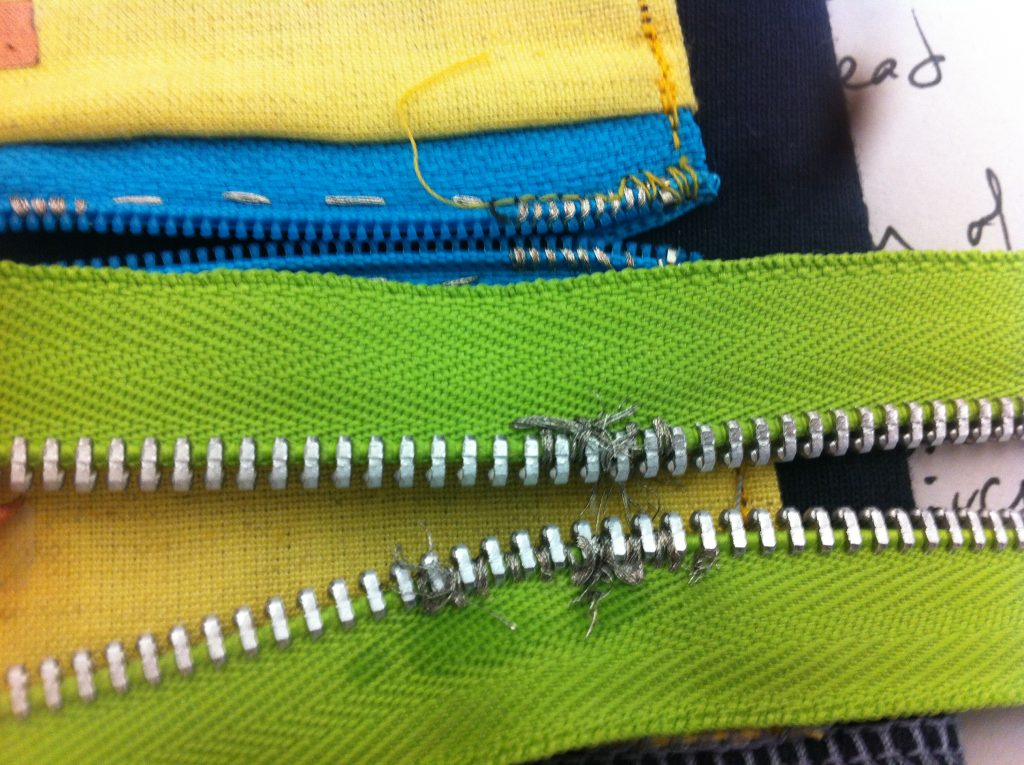 Then comparing the zipper teeth from Liza’s swatch to my zipper, I saw that the teeth in my zipper were larger. Which made it difficult. Look how messy my attempt to sew is. 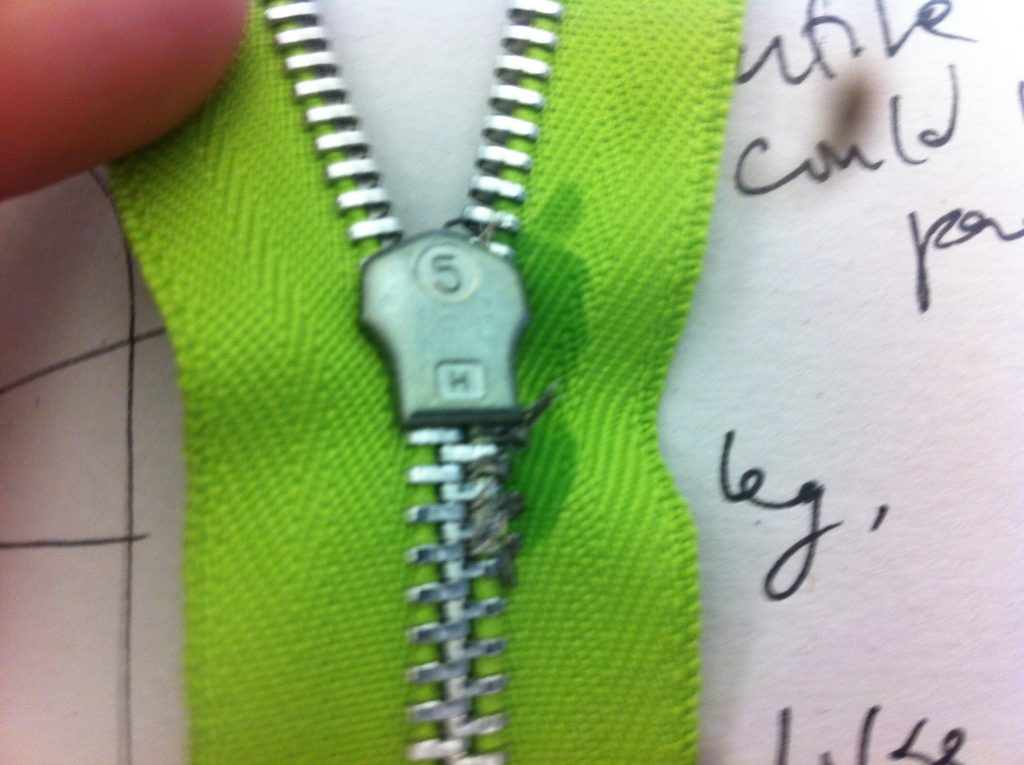 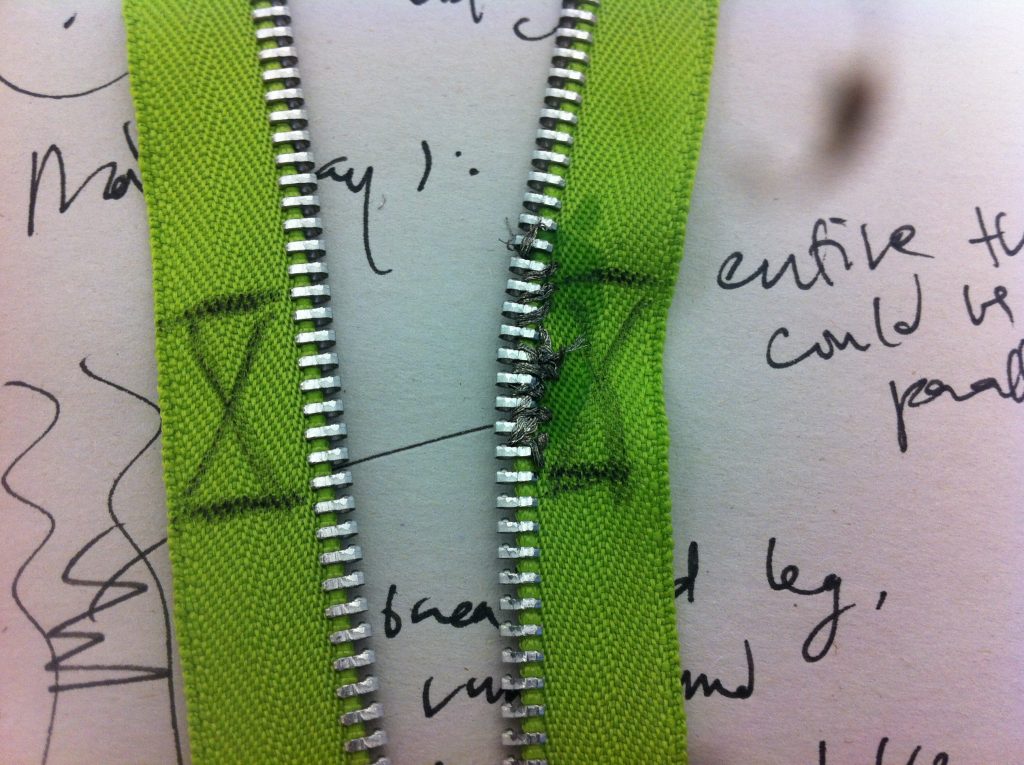 You can see how clumped it got. 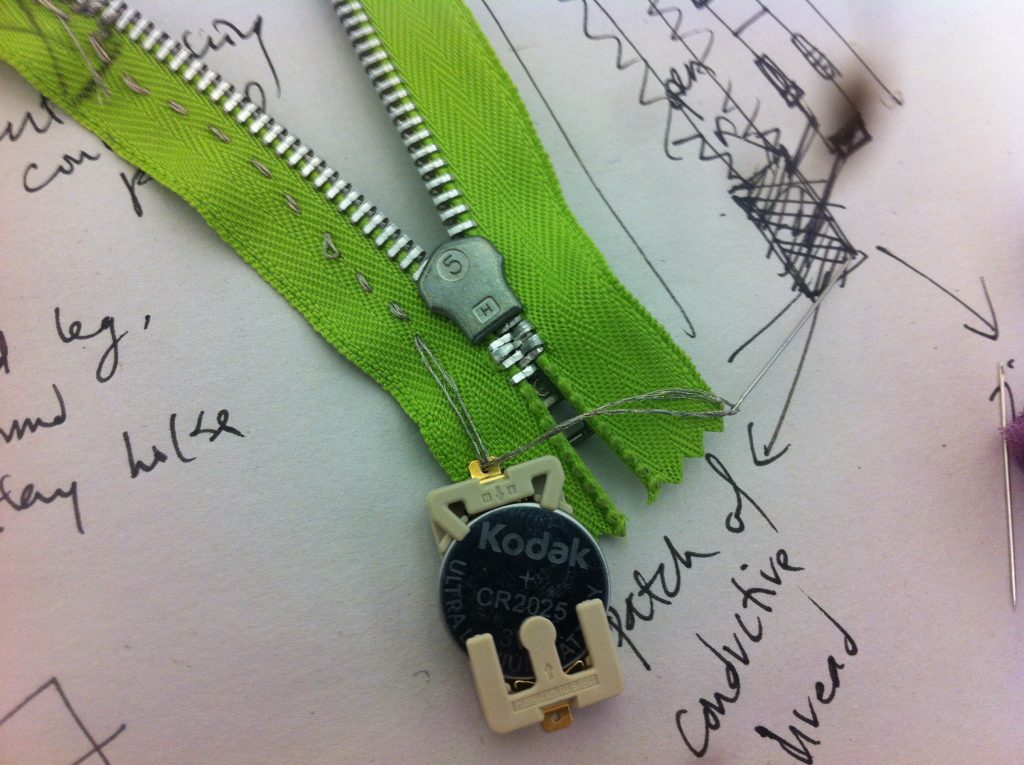 Then I would sew the battery holder in with the LED and resistor. 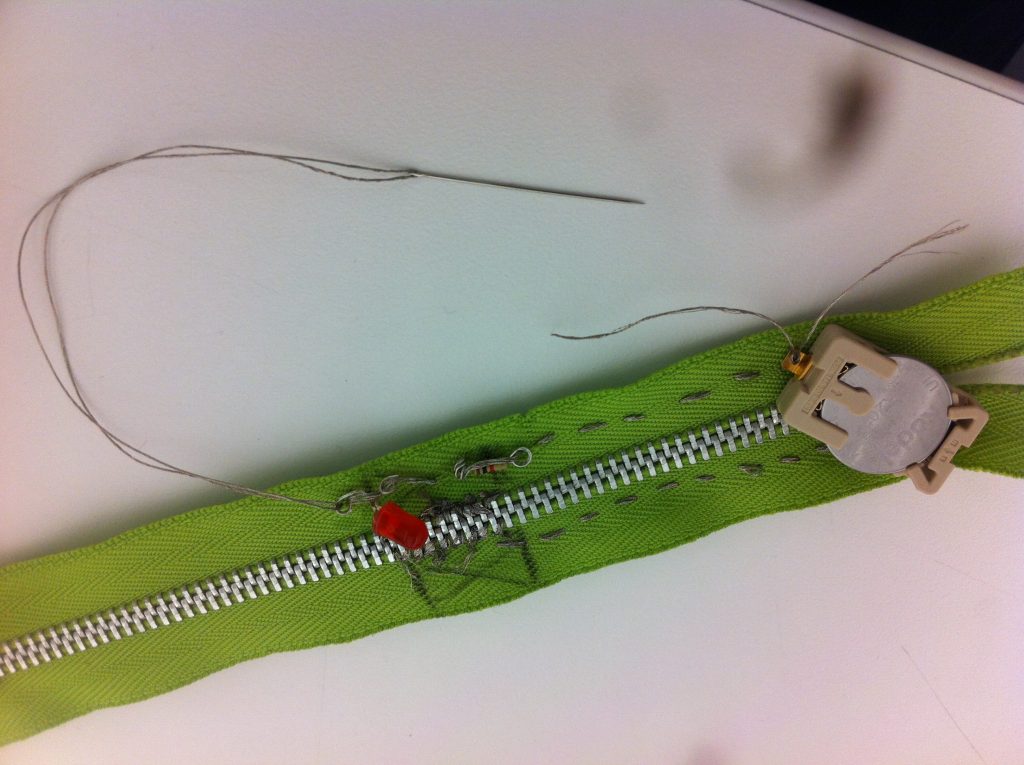 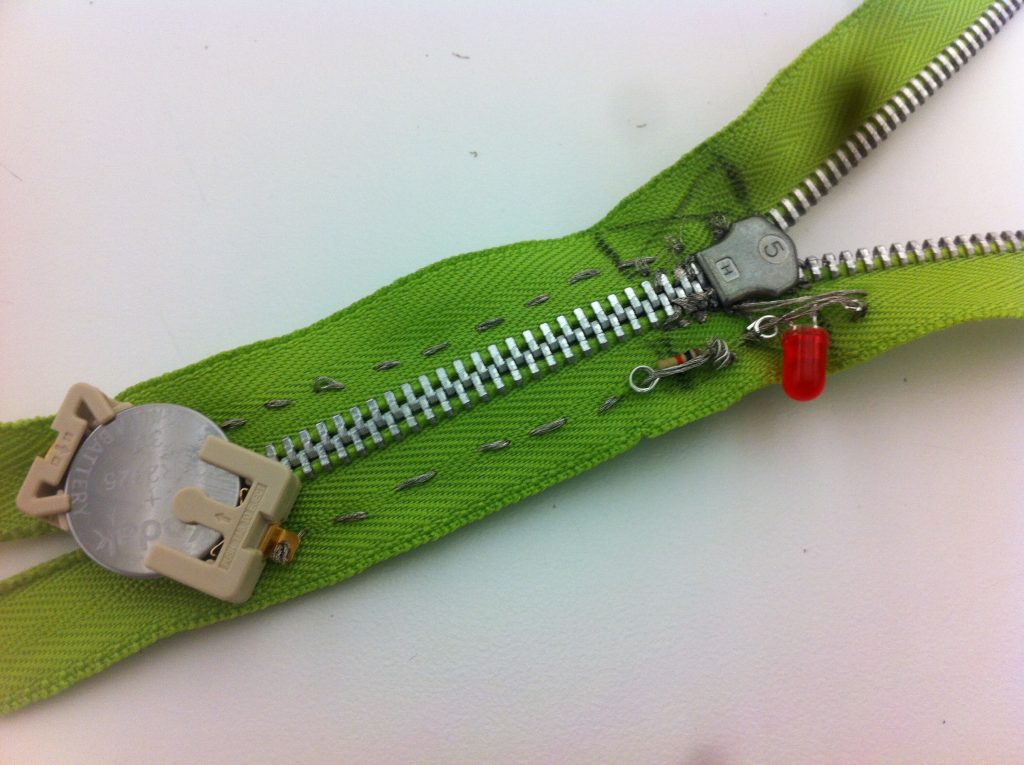 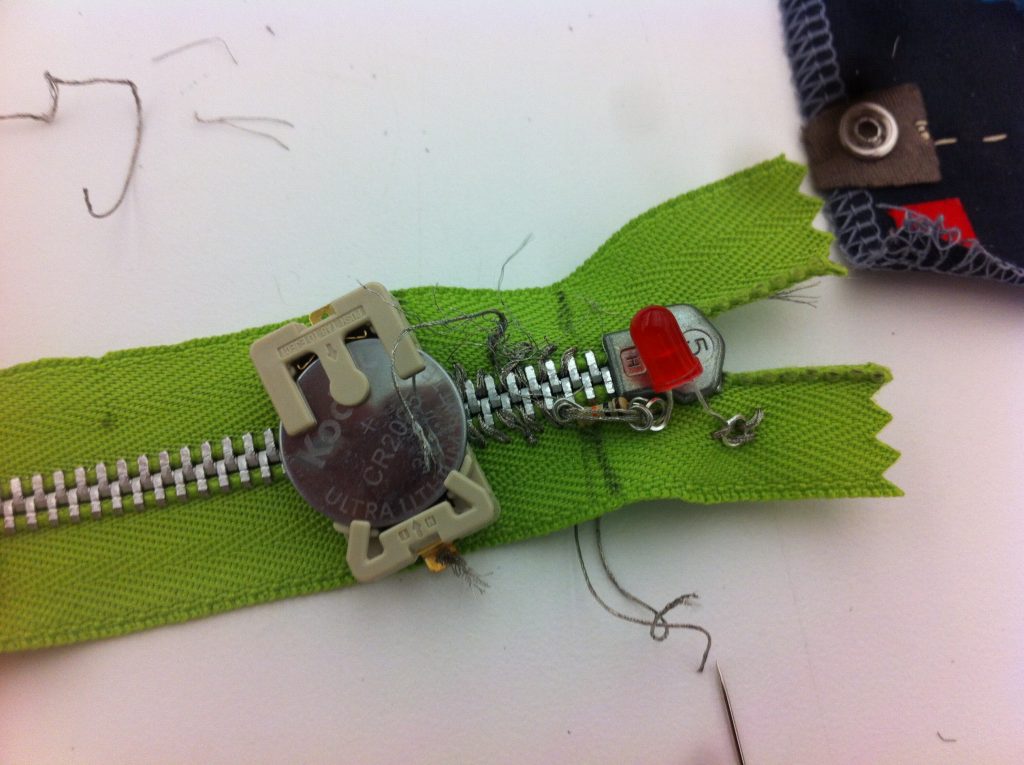 I tried a second attempt and that still didn’t work. 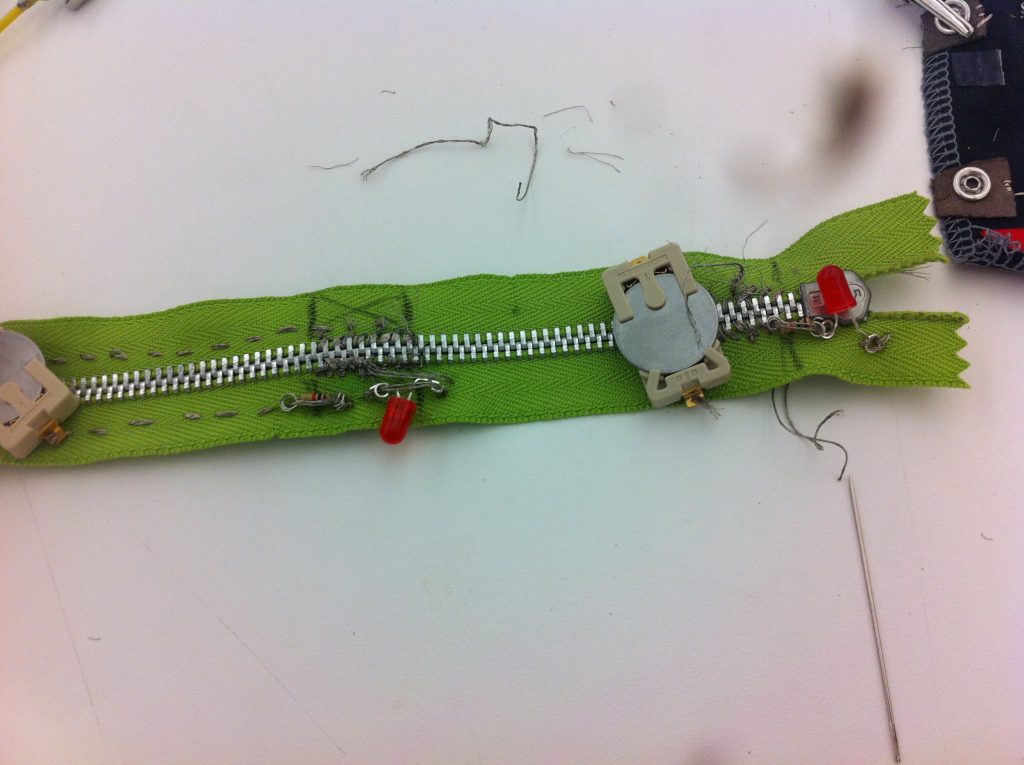 One thought on “Jed Segovia – Zipper Switch Test for Midterm”