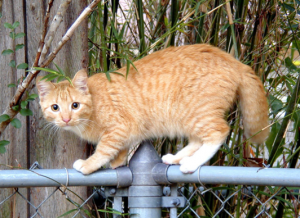 My cat always reacts to my Arduino projects so I figured that I would use her as my inspiration.  And when I started to light the LEDs I thought of kitties along a fence – thus my image.  I wanted to create scaredy cats who “hid” when they heard a noise but after the noise turned off they came back out.  Since we needed four LEDs I decided to have four cats with one being the bravest who always comes back out first.  I wanted to give them a sense of curiosity like they were peeping out from behind a fence after hearing the noise.

Making the enclosure was more difficult than I thought it would be.  I originally wanted to poke the LEDs through the top of the box and reattach them to the Ardunio but I couldn’t see what I was doing very well and as soon as a few things were connected something else would disconnect.  I think soldering in the future will help with this issue.