It loos like I never posted my midterm! Here’s the Midterm Presentation, the video is here and the git repo is here.

Vimeo: CCLab Final (and the video file in case that doesn’t work: CCLab_Final)

Here is my app! It’s a swarm of bees created using the OF add-on boids and a “queen bee” made with a bees class. Basically, if the “queen bee” returns to the hive, all the bees will swarm back. (click to see the interaction).

good things: i really like being able to integrate classes and add-ons. i also like exploring the add-ons and being inspired by them.

bad things: despite having the right syntax, i’m still having a tough time getting the ‘queen bee’ to trail the mouse. i just need to take a look at it when i have less going on, i think!

Here’s a link to the GitHub: Boids + Bees

And here’s a link to the Screencast: CCLabBoidsAndBees

Originally, I wanted to make a stuffed animal I called “Fever Bunny” that would sense the temperature of whoever is holding it and light up with the person has a fever (which I could do by mapping the fever range to match the LED brightness (like we did in class with the potentiometer).

I sewed the bunny by hand (with fabric I used to recover my couch) and sewed three LEDs where the heart would be. Then, I wrote some code that made the LED look like a heart beat (which I think would be soothing). But, when I tried to incorporate the temperature sensor, I kept getting readings below 0* celsius. I tried a few different resistors in a few different positions – and was able to get an LED to respond – but I couldn’t control the temperature properly so I decided to ditch that sensor.

Instead, I used a photocell to control the brightness of the LED. When the room gets dark, the heart LEDs dim. Now it’s more of a nightlight bunny than a fever bunny, but it’s still soothing!

Here’s a picture of the bunny:

Here’s a picture of Dan interacting with the bunny:

And here’s the video of Dan interacting with the bunny: Video

And here’s a link to the repo.

Here are the videos and schematics: one parallel circuit and one series circuit.

This is the first thing I’ve ever done with electricity (let alone p.comp) and it’s so much fun! It’s amazing how exciting it is to make three little LEDs to light up. So far, everything seems pretty clear. The only thing I’m a little unsure about is the calculating the voltage, current and resistance of the series circuit. I think I could use a quick break down of the math – but Liza, I’ll come to office hours and talk to you if I’m the only one!

Here’s a link to the repo for this post: Oct9HW

Anyway – I can’t wait to find out what’s next! 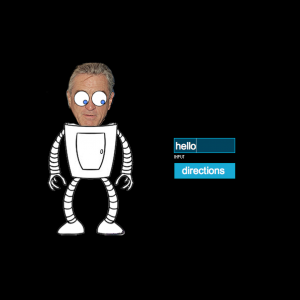 This week, I used the TTS library (which reads text) and the ControlP5 library that we installed during class to create a robot that you can have a conversation with. Basically, you enter certain prompts and it says things back. Of course, it’s super limited but it’s a start! Also, when the voice said “Robot” I thought it sounded like “Robert” so I turned the robot into Robert De Niro.

Here’s a link to the repo: CCLab_RobotDeNiro.

Have a great weekend!