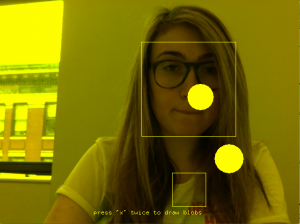 I decided to port my bouncing balls sketch from Bootcamp into OF. Video can be found here (it works better with multiple people, but it’s just me here right now!). GitHub code is here.

When I originally had the Haar recognition working with the video, the entire thing began to skip and move really slowly, and then the balls moved really, really quickly. But, when I incorporated the image grab and had the haar recognition look at the image, instead of the video, it worked!

Also – here’s the website with the bouncing ball code (and a bunch of other codes).