2 / Post documentation of your favorite work by other designers/artists that inspire you. 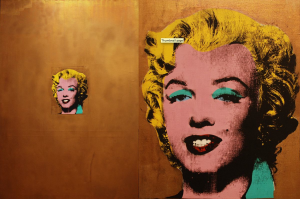 My favorite work is Andy Warhol’s Gold Marilyn Monroe. Andy Warhol who has influenced greatly in the history of pop art. However, his achievements were not only in art but also over a variety of genre such as music, movies, etc. As he had worked as an illustrator in many advertisements, he was able to see accurately which concepts and topics would be marketable. Also, he jumped over the traditional boundaries of the paintings to create his own unique works. These points have suggested the directions for us to march in the rapidly changing industrial era. I think that his uniqueness enabled him to study and create a variety of genres so that he can develop even further. Through Andy Warhol, I must learn the continuously challenging mindset.

3 / Write a short paragraph explaining what you hope to get out of this class based on today’s discussion.

I don’t know about coding such as processing, arduino or openframe. During the bootcamp, I watched a video on Ted.com called “Ted idea worth spreading by Aaron Koblin (http://www.ted.com/talks/aaron_koblin.html). I realized how important using code is and I also want to make a awesome project using code. I have a strong interest in motion graphics and 3D design. When I read the agenda from first week of class, I discovered that we will be using OpenFrameworks that is used to develop into video graphics, 3D graphics, iOS or Android and I was very excited. Although I do not know anything about C++ language, I would like to learn about OpenFrameWorks!