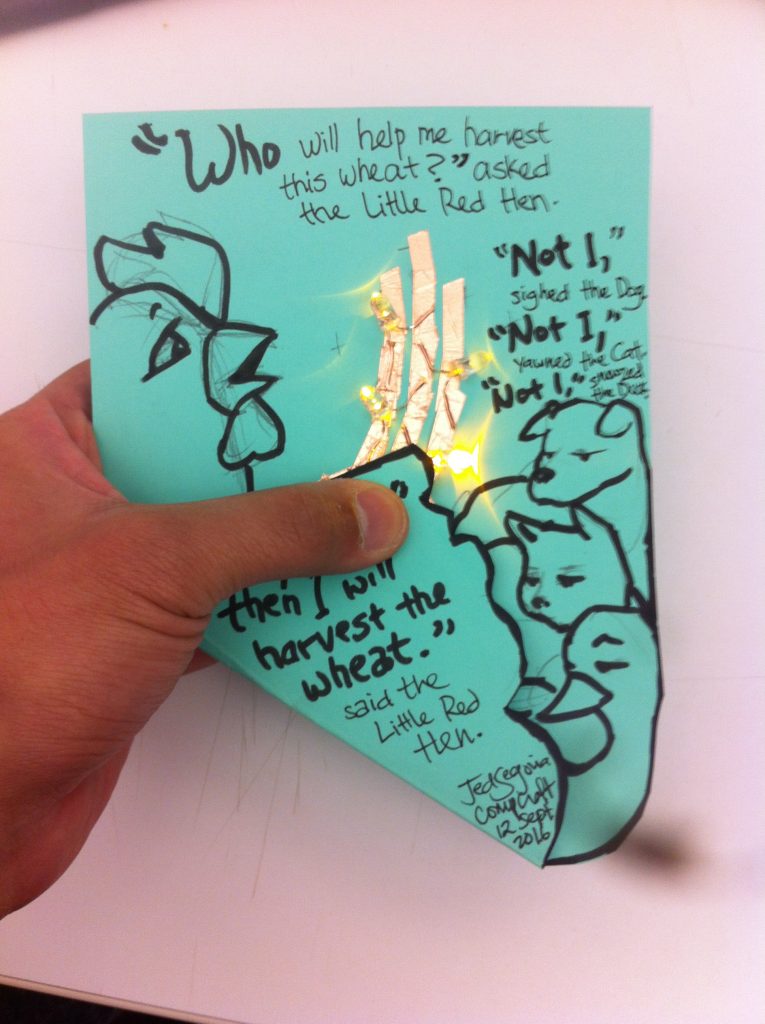 My chosen passage is from The Tale of the Little Red Hen.

Here is my sketch of how I wanted it to look. 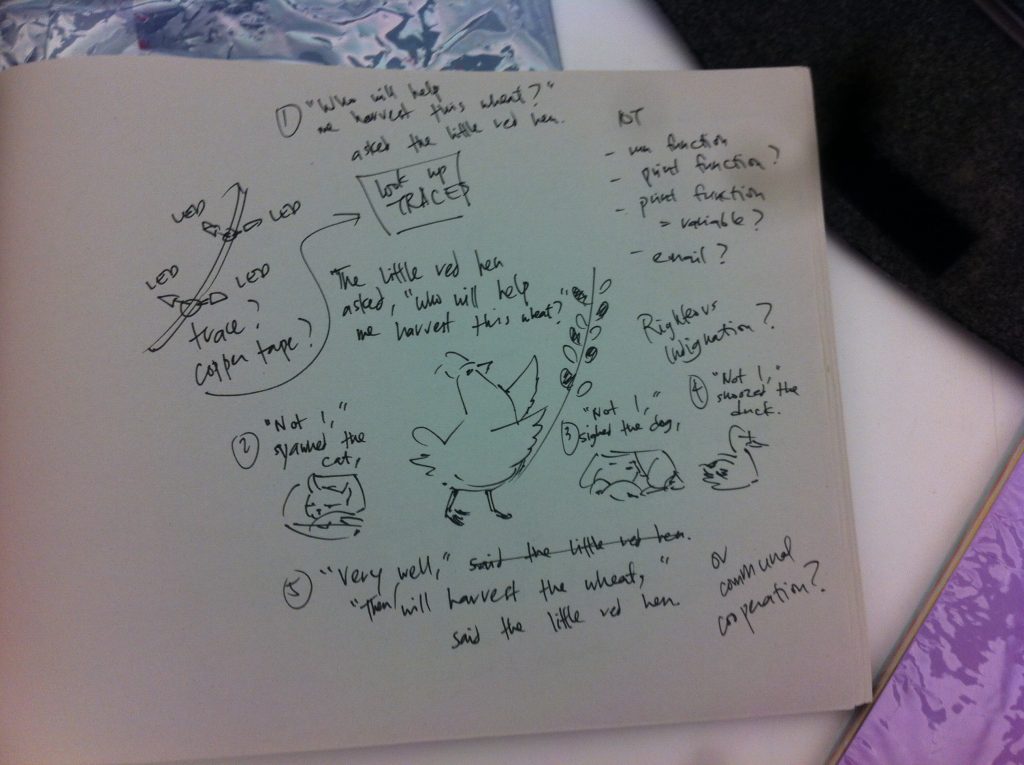 I wanted the wheat to be the central piece of the illustration. I wanted to use yellow LEDs as the wheat buds. So the hard part was crafting traces to give it a smooth, organic look for the wheat stalk. Once I had the circuit done, I would illustrate around it.

I decided to make a parallel circuit because I learned last class that series circuits don’t work with 3V batteries.

I first did testing of the Simple Circuit Diagram, using High-Low Tech’s tutorial as a reference. 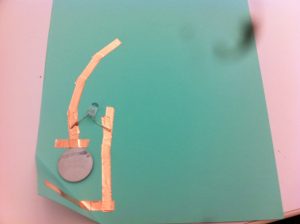 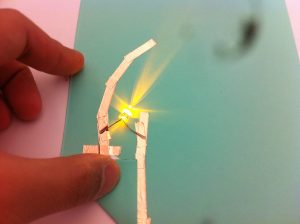 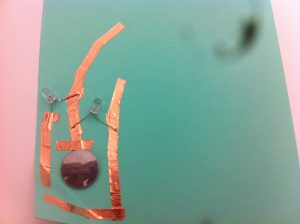 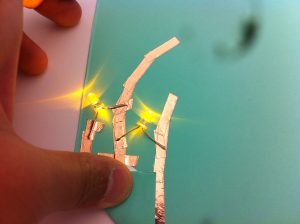 Once I got those in, I felt confident. Now I wanted to add a third LED. This time, I wanted to bend the LED nodes so it wouldn’t be awkwardly sticking out. I took out my long-nose pliers and tested it out, by bending the nodes. 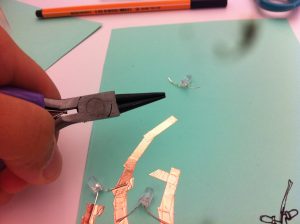 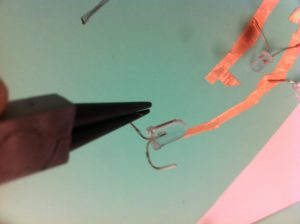 So you can see, I got it curved nicely. And once I got that working… 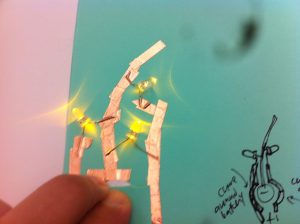 So I sketched out a diagram to refine the next iteration, once I got the principles working.

I couldn’t figure out how to hide the battery in the time I had. So I worked a diagram that at least aestheticized the circuit. So I went to sketching the illustration. First, I drew out the wheat stalk, that would serve as the circuit path. This would be the negative path. Then I followed by adding two positive paths. Once those were drawn in, I added copper tape. 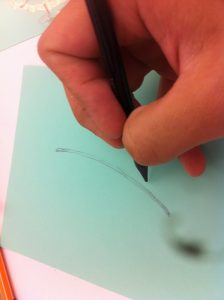 Then I hit a problem: how to activate the circuit? I first thought about making a pop-up component: I would put in a folding wing and integrate it into the illustration. The wing would be the chicken’s wing, with copper tape put into it. So I tested that. 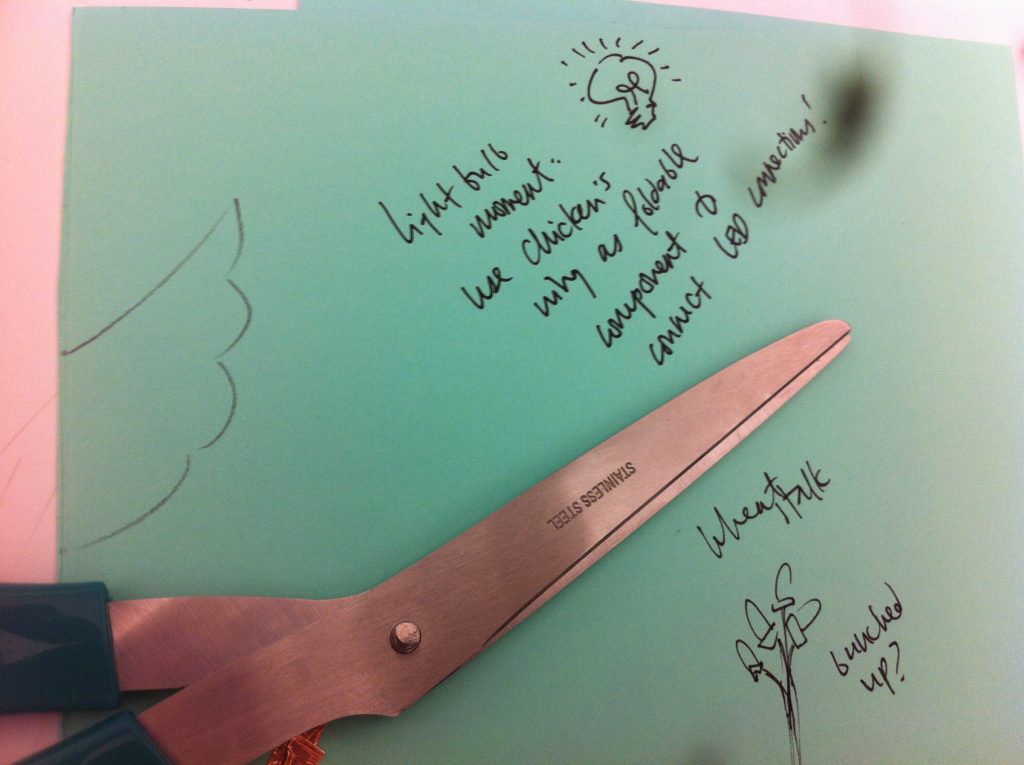 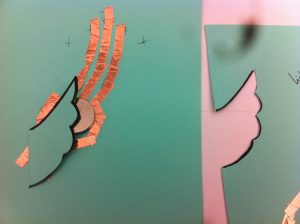 As you can see, I ran into problems right away. I didn’t measure the wing so it wasn’t large enough to cover both the circuit and allow for space to be taped into the paper.

I hit an impasse of forty minutes. Forty minutes of frustration and panic because I couldn’t get the circuit to work. Was it because the copper tape wasn’t connected enough? Were the LEDs loose? I had no idea. I got it to light up but not totally.

Then I kept looking at my first circuit, which was working…

So why not use that, and stylize the folding corner as a wing? That was born out of necessity than anything, but it was a great creative solution to me. 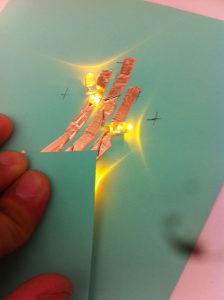 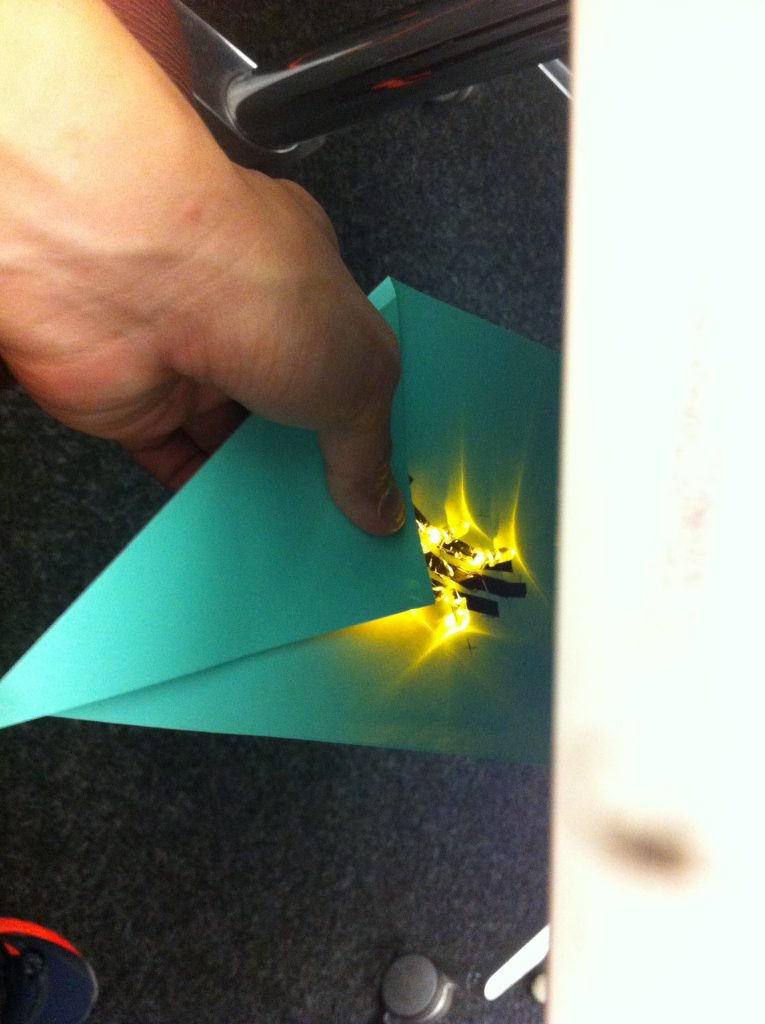 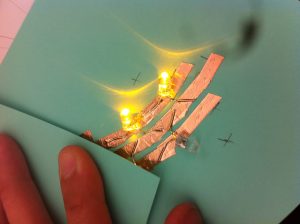 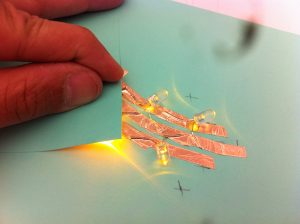 Now it was a matter of illustrating the scene, and integrating the circuit solution into it. 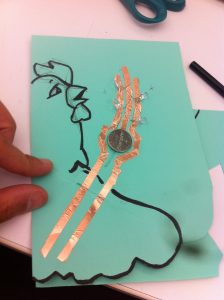 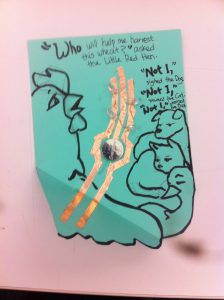 And there we have it! A scene from the Tale of the Little Red Hen, with light-up LED wheat buds. I’m really, really happy it works. It needs a lot of hard pressing to light up, but it lights up, and to me, looks GREAT.

[EDIT: Wait… I reviewed the homework and it said it wasn’t supposed to be “interactive.” Is… this interactive?]